The St Andrew’s College Act of Parliament is available for download here.

Shortly after the St Andrew’s College Act was proclaimed to commence in August 1998, the College Council met to make and give immediate force and effect to new By-laws, signed by the Chair of Council. Amendments were made to the By-laws in March 2005.

The St Andrew’s College Incorporation Act received Royal Assent in 1867; the 31st year of the reign of Queen Victoria and was only replaced by an updated Act as recently as 1998. In 1870, the College Council first met and in 1876 the students entered the grand sandstone Scottish baronial building now known as the Main Building.

The basic idea of the Andrew’s crest comes, of course, from the Scottish national flag, showing the white saltire cross of St Andrew on a blue ground.  This form of cross was used as a Scottish device since the fourteenth century and the convention of white on blue was firmly in place five hundred years ago.

In 1876, the Council of St Andrew’s College commissioned the Colonial Architect of New South Wales to design for them a coat of arms to use on their new corporate seal. James Barnet was the Colonial Architect, one of the most distinguished of all government architects here, and he designed a shield with a white St Andrew’s saltire cross on a light-ish blue ground, with four eight-pointed stars arranged between the arms of the cross.  An open book with ‘Holy Bible’ written in English on its two visible pages lay in the centre of the cross. 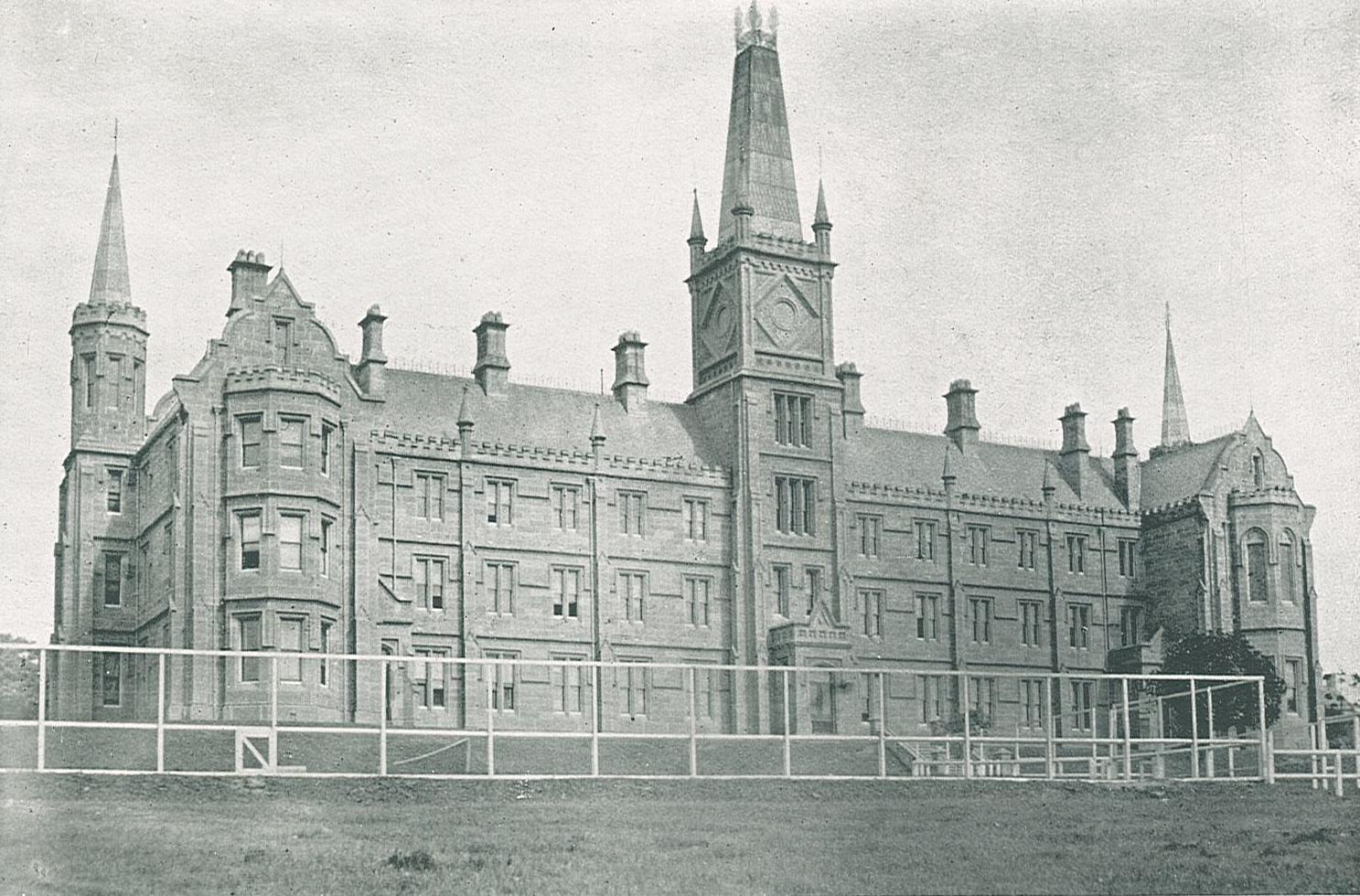 In 1883 this crest was incorporated into the College seal, which the Secretary of Council still uses today to authenticate serious documents.  Around the outside circle there is the Latin description of the artifact: Sigillum Collegii Sancti Andreae in Universitate Sydneiensi , meaning ‘the seal of St Andrew’s College in the University of Sydney’. Around three sides of the shield there is the College motto: Christo, Ecclesiae, Litteris.  This three-word motto seems to have been written by the great Professor of Classics and Logic at Sydney, Charles Badham, who also composed the motto of the state of New South Wales. It means ‘For Christ; for the [Presbyterian] church; for learning [or scholarship]’. The use of ‘litterae’ in the sense of scholarship is thoroughly classical: Cicero, for example, in one of his great early forensic displays, disposed of Verres as sine humanitate, sine ingenio, sine litteris, ‘without liberal education, without natural talent, without learning’ (In C. Verrem 2.4.44.98). The spelling of ‘learning’ in the College motto oscillated between litteris and literis, but Britain’s mentors for Latin propriety, Brambach and then Lewis and Short, long ago declared that literis was less correct and the double t has become the College norm.

The shade of blue originally used for the crest seems to have been quite light: an appeal for funds printed in 1891 is the earliest example of a coloured crest surviving in the College archives. There are also caps and badges in existence from the 1920’s which reaffirm this preference for a light blue.

In 1964, however, the Principal, Alan Dougan, and some old boys realised that the Colonial Architect had no right to issue crests of arms, even in his own colony.  This was the prerogative of the College of Arms in London, for England, or the Court of the Lord Lyon King of Arms, for Scotland.  Dougan very properly chose to go to Edinburgh rather than London.  There he discovered that the crest designed by James Barnet had in fact been granted long ago, before St Andrew’s College had opened its doors to students, to the University of Otago in that most Scottish of colonial cities, Dunedin, the exact antipodes of Edinburgh. The Lord Lyon, however, on payment of a substantial fee, redesigned our crest, so that the saltire cross was no longer straight-edged but ‘engrailed’ (i.e. scalloped) and the four stars were no longer twinkling with eight points each but became instead rather jaunty amoebas waggling six very mobile arms. The book in the middle remained, but lost its identification as the Bible, while gaining bright red edges.

The blue is defined as heraldic azure and the colour painted on the grant of arms in 1966 is the definitive colour of Andrew’s.  It is neither the dark blue of the Union Jack and the Australian flag, nor yet the light blue used for sporting colours.

Professor Ian Jack is the College Archivist and resident Senior Fellow of the College. Professor Jack is responsible for maintaining the College’s archives and has authored several books on the history of St Andrew’s College.

The newest wing of the College, recently named the Hanks Building, is home to a new Archives Room, with humidity control to maintain the records of St Andrew’s. Lining the hallway of the Main Building, you will find photographs of Alumni dating back over 130 years; these are copies of images that form but one small part of the College’s archives, along with copies of the College Magazine, Council and Foundation minutes and student records. The archives are a central part of the historic fabric of the College, ensuring that our tradition and past remain preserved.