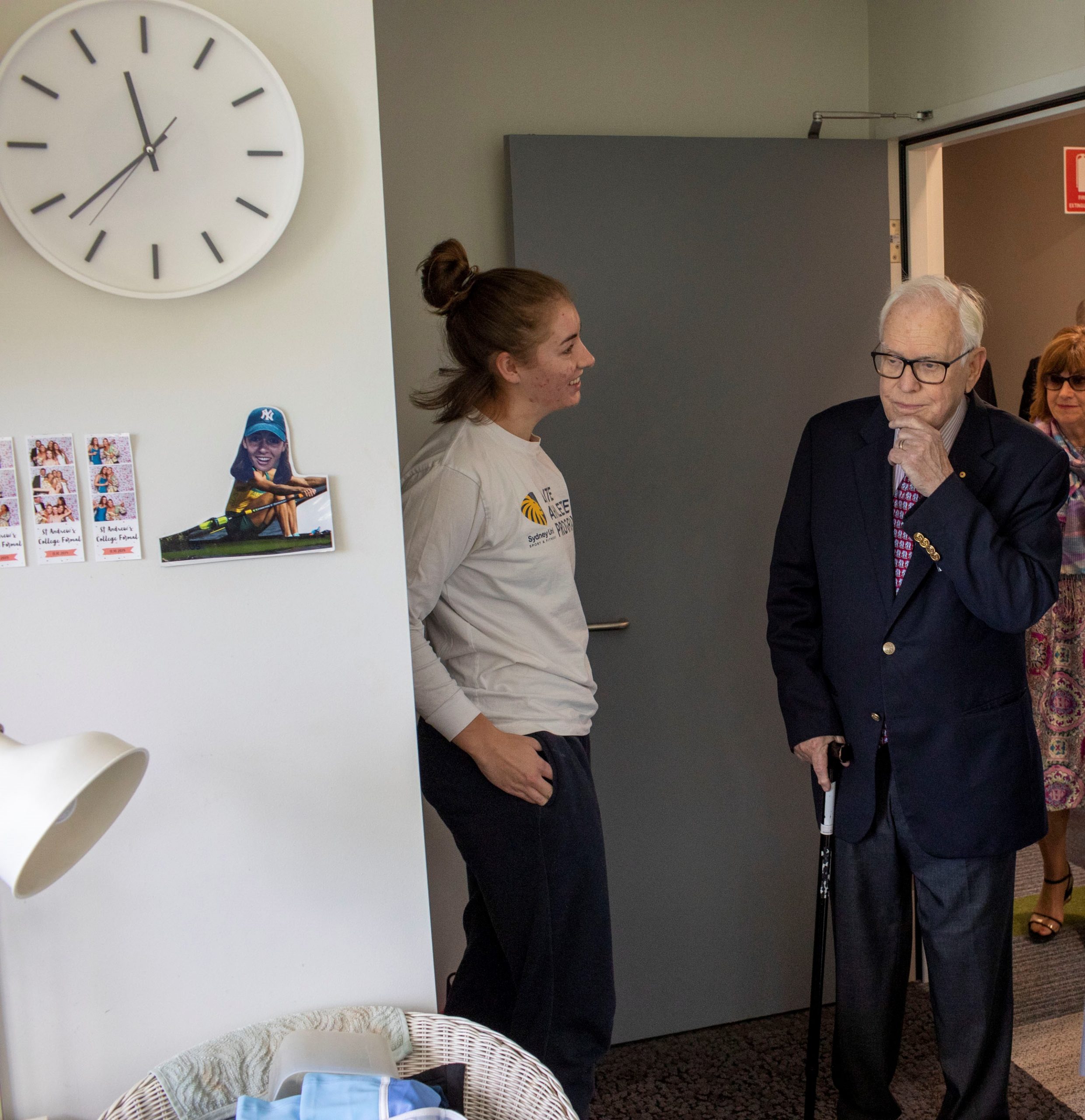 Clifford Blake first came to St Andrew’s College in 1962 as a Residential Tutor, before later being appointed as the Wilson Fellow and Senior Tutor from 1968 – 1970. Graduating from The University of Sydney with the University Medal in Agriculture in 1958, he also studied at Rothamsted Experimental Station in England, earning his PhD from the University of London. Clifford then went on to travel to the USA on the Rockefeller Travelling Fellowship, before returning to the University of Sydney as a lecturer in plant pathology. In 1988 he was made a Member of the Order of Australia 1988 for services to tertiary education. He later went on become the first Vice-Chancellor of Charles Sturt University from 1990 through to 2001. Clifford is an Honorary Fellow and a member of the 1867 Circle.

What are some of your favourite memories of your time being associated with the College?

The great diversity of student backgrounds, the population was very interesting. Some of whom became notable people on a national basis.

Meeting Dick Spann, the most impressive academic I have ever met. He always had advice to give, and held the place together.

Time spent in the Senior Common Room with professors and senior academic staff.

What made you choose to come to Sydney University, and live and work at St Andrew’s College rather than anywhere else?

There weren’t many other universities to go to – the others didn’t exist. Newcastle was still a College. There was only Sydney and New England, but agriculture was mainly at The University of Sydney.

College was quite different in your time to today – what are the main changes that stand out to your today?

The College has changed tremendously for the better. The entry of women into College, and other things have changed too – it’s an intellectual place. The development of music and other artistic pursuits in the College have been significant.

In your opinion, what is the most important work that the College does?

It does many important things. College provides an environment conducive to good scholarship. It is a convenient place to live, and students can concentrate on their studies. It is also a great place of networking, People do form those networks in student days, and they endure for a lifetime. College also offers insights into other students’ lives and backgrounds, which in turn helps to broaden interest and understandings.

You studied agriculture at the University of Sydney. Do you have any advice for students looking to study and have a successful career in Agriculture?

It is a vitally important field. Agricultural practice is undergoing a big change, moving from small to big farms. There is much more mechanisation, and plant breeding has changed to newer breeding techniques being used. There is concern about water conversation and growing drought resistant crop varieties that use less water.

You were the Wilson Fellow and Senior Tutor from 1968-1970 at the College. What did these roles involve in those days?

The Wilson Fellowship was a benefaction to the College, and was awarded to encourage a senior academic to become resident at the college. It was a requirement to live at College, and be a tutor. The Senior Tutor position was unconnected to the fellowship. The job was to organise the tutorials, recruiting people to be tutors, then setting up the arrangements for the tutorials to be held and encouraging students to attend them.

How did your experience at St Andrew’s College help you to shape your future employment and life opportunities?

I developed an interest in educational administration, and educational management, and wanted to champion the voice of the students.

You became the Vice-Chancellor of Charles Sturt University, from 1990 through to 2001 and then after your retirement from CSU in July 2001, you took up a Vice-Chancellor position at Adelaide University from August 2001. How did you find the shift from research and lecturing in agriculture to running a university? What were some of the challenges you faced in those positions and how did you overcome them?

It was very satisfying, but to become the VC of the youngest University and then third oldest university was quite a dramatic change. At Charles Sturt you could almost change things overnight, but The University of Adelaide had long standing traditions, and to get a minor change through was a huge thing.

There were some challenges at Charles Sturt. It was the first time there was a university in the town. To establish the university values in a country city was a challenge, and getting the town to welcome the university was hard. The city was interested in money and employment, and what it taught and how it taught was not such a big concern. The region beyond the city, local councils and businesses gave enormous support, however.

You are also a member of the 1867 Circle, having indicated you have left a bequest to the College. Could you expand further on why you chose to do this and why you think bequests are important?

I have left two scholarships, to be awarded to a student who does their HSC in non-metropolitan Sydney. I want to take someone like myself who went to a small high school where they may not have full exposure to HSC courses, and give them the chance to come to The University of Sydney and get all the experiences that come with St Andrew’s College.

The Advancement Office would like to thank Clifford for taking the time to speak to us.