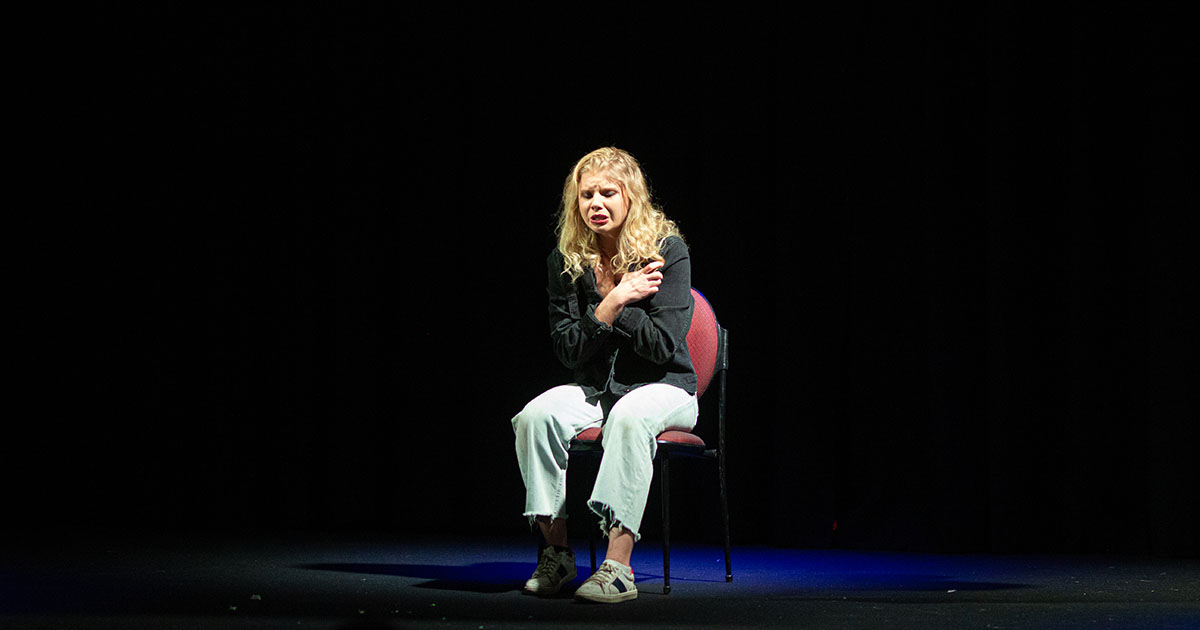 Alice Litchfield (Fr 2019) is a member of the Students’ Club House Committee and this year’s Cultural Rep. Alice, who grew up in Orange, NSW, is studying for a Bachelor of Communications (Media Arts and Production). She is the recipient of the Alan Kendall Award for Drama 2020 and 2021. This year she represented St Andrew’s in the Palladian Solo Drama 2021 and was awarded first place (pictured on stage in the Palladian 2021). We met with Alice to talk about her starring role in this year’s Dramsoc production and what she’s been up to at College.

Tell us about your experiences in music/drama and why it’s a passion of yours
The performing arts has been an integral part of my life since before I can remember, with my first role in the Orange Theatre Company’s production of The King and I at age 8. Since then, my passion for the stage has only grown in playing roles including Glinda in Wicked, Amber in Hairspray, Julia in The Wedding Singer, Dimity in Schapelle Schapelle! as well as minor roles in Jesus Christ Superstar, The Sound of Music, The Wizard of Oz and Little Shop of Horrors.

During my time at St Andrew’s, I have thoroughly enjoyed representing the College in the Solo Drama of the Palladian competition, as well as being part of the Dramsoc plays. In my fresher year I played the role of Judith in Hay Fever and last year I directed The Game’s Afoot and played the role of Martha.

This year I am playing the role of Francis in One Man Two Guvnors and cannot wait to bring this play to the stage with the easing of COVID restrictions in October 2021.

Acting has always been a fun, invigorating passion of mine, and COVID has brought me to understand the power of performance in not only providing entertainment, but also in providing a platform for telling the stories which need to be heard.

Tell us about your recent success
Over the last three years I have played the role of Dimity in Schapelle, Schapelle! an original comedy musical which has run at the Sydney and Adelaide Fridge festivals, as well as in a one-month season at the Manning Bar as part of the Sydney Comedy Festival 2021. This has been a fantastic opportunity for me to integrate into the industry and pursue my passion. At College, I represented St Andrew’s in the Palladian Solo Drama in both 2019 and 2021 and was lucky enough to bring back a first place on both occasions.

What is your biggest goal?
To perform alongside Nicole Kidman … you did say biggest goal!

What other activities have you taken part in at College?
In my three years at Drew’s I have been in the Rosebowl Netball and Basketball teams, in the Dramsoc plays, have facilitated, and performed at ‘Jam Nights’, volunteered for the Newtown Mission and performed in the Palladian solo and group drama.

What made you choose St Andrew’s?
Being from the country, I was always excited by the idea of attending college in Sydney. St Andrew’s appealed to me due to its creative arts program, as well as its fun, ‘give everything a crack’ culture.

Has St Andrew’s has supported you to achieve your goals?
The Creative Arts program at College has allowed me to continue to develop my skills in theatre. Being surrounded by driven peers who share the same passion allows for you to strive for your best in every aspect of college life.

What’s the best thing about College?
The people!