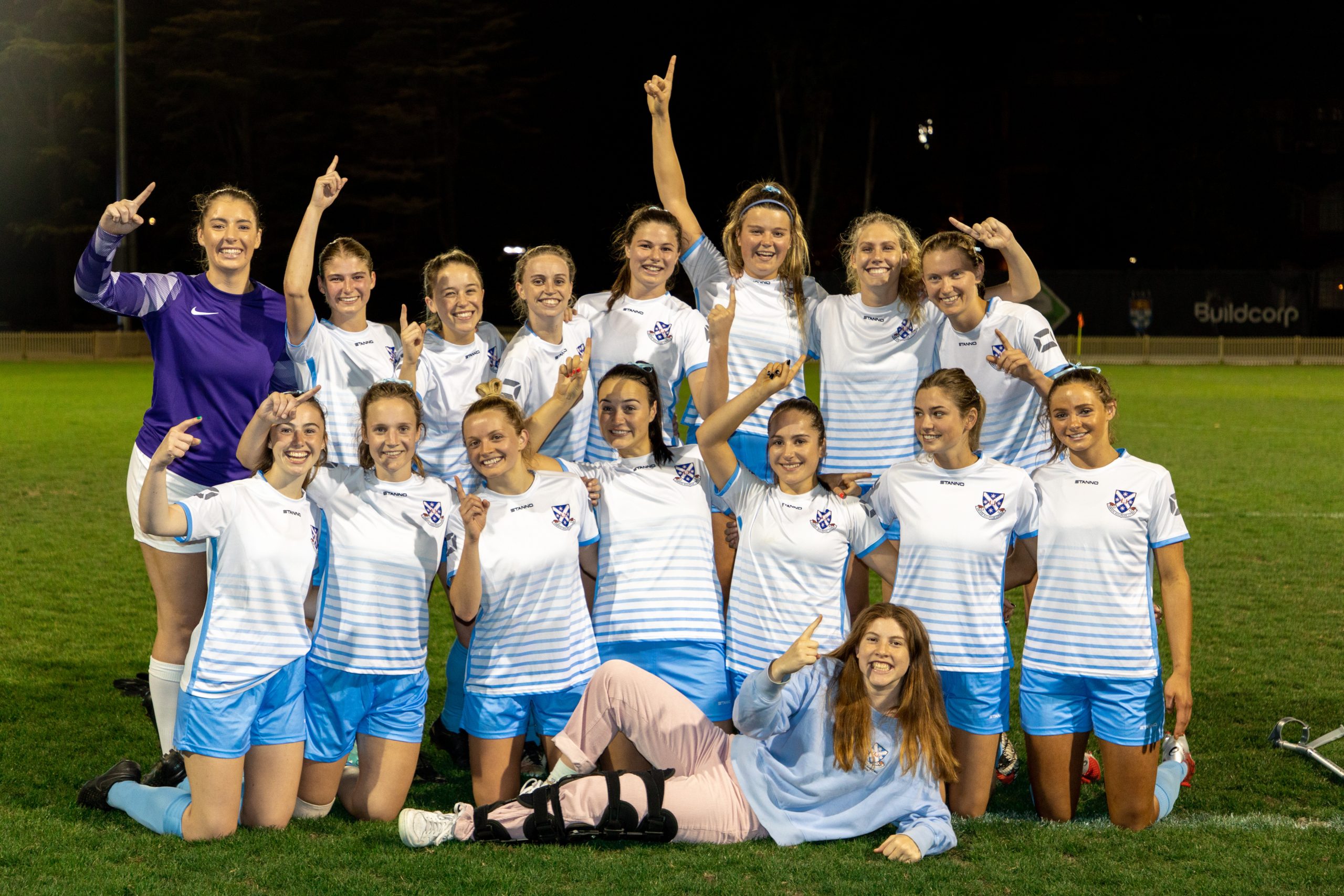 The 2020 Rosebowl Soccer campaign was a continuation of previous years which saw the Andrew’s women achieve great success. This can only be attributed to the dedication, hard work and determination of our talented team members.

For the second time, the final game was played under lights with a grandstand packed full of blue and white and the girls came together in what was to be an expected tight match. Having been the only team who had not yet suffered a loss, defeating Women’s (3-1), Wesley (3-0) and Sancta (4-0) there was an air of confidence amongst the team.

The condensed game time as a result of COVID-19 stressed the importance of an early goal on the scoreboard. This didn’t take long as a through ball was placed down the line to Julia Vignes (Fr 2020) who crossed the ball to find Teigan Collister (Fr 2019) on the penalty spot and hit the net first time. The second goal came soon after with Clare Hunt (Fr 2016) winning the ball outside the box and striking an impressive top right corner. Again, the Collister-Vignes combination proved to be successful with another through ball from Ash Dribbus (Fr 2019) down the right side to Julia, crossing it in to find Teigan, impressively volleying it into the right corner for her second goal of the match. This was again repeated only minutes later securing Collister’s hattrick and finishing the first half with a 4-0 Drew’s lead.

The second half proved to be a continuation of the momentum created in the first with another early goal from Teigan alongside a steady Drew’s backline. Not long after Clare Hunt scored perhaps the most impressive goal of the campaign so far, with Millie Youngman (Fr 2019) slotting a through ball down the left side by-passing John’s defence to Teigan crossing it in to find Clare’s head in the 6-yard box, a spectacular display of football. The final minutes of the game saw a free kick from Ash Dribbus find Julia Vignes in the box to secure the Andrew’s victory.

The overall cohesive team performance started from goalkeeper Zoe Haseler (Fr 2019), able to maintain a clean sheet with an extremely stable campaign, aided by the impassable defence line. Centre backs Charli Kearny (Fr 2020) and Clare Hunt were both strong in the air and on ground when John’s looked to attack in transition moments, whilst assisting in attack. Fullbacks Pamala Murphy (Fr 2020) and Millie Youngman (and sub Maisie McFadyen Fr 2018) also shut down any attack from John’s fast strikers and placed dangerous through balls to our attacking line. Furthermore, the dynamic midfield consisting of Emily Cooke (Fr 2018), Charlotte Hailing (Fr 2020) and Ash Dribbus (and later Olivia O’donnell Fr 2020) provided cohesion between the attack and defence, a major contributor to the attacking lines success. Such was seen by the impressive score lines from the dominant strikers, Julia Vignes and Teigan Collister assisted in the centre by Anna Mactier (Fr 2019) and later Katinka Morris (Fr 2019), with the final whistle blowing to confirm a 7-0 Andrew’s win.

It has been an honour to captain such an impressive team who displayed enthusiasm in the early morning trainings, determination during the games and comradeship throughout the campaign, which has led to a spectacular display of football and should be commended. This could not be achieved without overcoming the adversity leading into the matches, and I would love to extended a massive thank you to Annabel Martin who whilst unable to play captained from the sideline, providing her expertise and knowledge both throughout the campaign and training which significantly impacted the teams’ overall success.

We look forward to sharing a photo album from this event shortly.