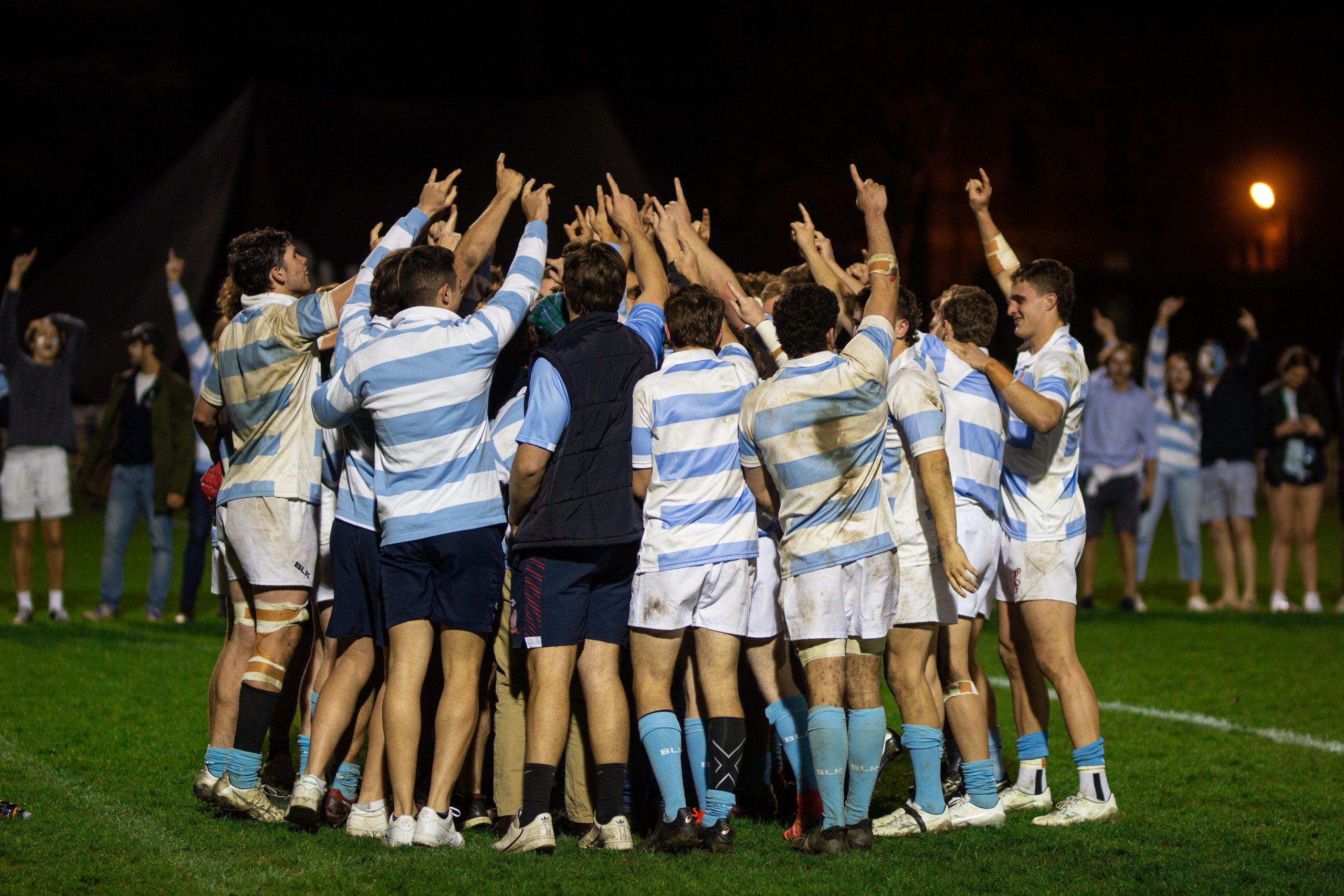 Daniel Breden, our 2021 Rawson Rugby Sec, recaps an undefeated campaign that concluded with an epic finale on the evening of Wednesday 26 May.

The men’s first game came against Wesley College and after almost two months of trials and training there was an extreme sense of excitement to finally get the campaign underway. It was a rainy day on the Drew’s oval with the mud causing some serious problems for both sides.

The first fifteen minutes was a tight affair, as both teams felt the pressure of hard line speed in defence and the sludge underfoot. However, after weathering the Wesley storm through a defensive effort led by captain David Tejcek, the Drew’s men pulled away on the scoreboard through some silky play in the backs set up by the likes of Ben Stewart, Dan O’Brien and Oliver Little.

By the second half, Drew’s was kicking into second gear and the tries were flowing freely. A big Andrew’s crowd, even without the wet weather, were being treated to a clinic by our men, led by some second-half heroics of James Constable and Campbell Duff. The final score was an enormous 118-3.

A week later the next test came against St John’s College. The words of Coach Nick Ryan rang in the players’ ears, “The team that improves the most across the campaign, is the team that will win the final”. Knowing that our talent wouldn’t decide victory but rather how well we gelled as a group, John’s was a big opportunity to build chemistry. However, with over ten players injured or unavailable at the junior Wallabies camp, many players needed to step up into the side. A special mention must go to Hamish Crafter, Rob Abadee and Tommy Milin for responding to a late call up in this game and performing as if they had been training with the group the entire semester.

Similar to the Wesley game, a tough battle ensued to begin the game with the John’s scrum flexing its dominance. The game was relatively tight with John’s scoring two tries against the run of play. Monstrous 80 minute performances for the second game running by Will Smith and Bass Martin saw the Drew’s men take the fight to John’s and run away on the scoreboard. A second-half hat trick to Jake Jorgenson and an immediate impact by Harry Wilson off the bench saw Drew’s finish as the victors 97-12.

A long two week wait ensued before the final against Paul’s arrived. In the week leading up to the game there was an excited atmosphere around College that was palpable.

The Sunday before the game saw the Women’s 7s rugby team perform outstandingly in their rugby gala day. It was extremely rewarding to see how far they had come in their rugby journey in such a short time as a result of the men’s coaching and their own hard work. All eyes turned towards the two finals and our men now had to focus on their own job to do. The team knew that the game would be won in the forwards and would have to flex their strength at set-piece. We did exactly that, in the form of a maul in the first lineout of the game, pushing the Paul’s forwards over 30 metres backwards. That dominance would continue in defence as the line speed of Drew’s led by captain Jacob Ratcliff and enforcer Daniel Botha, completely shut down any Paul’s attack.

Paul’s tried some nifty kicks to test our back-three but the experience of Harry Wilson at fullback was extremely reliable in getting us out of any dangerous situations. The 19-3 halftime lead was promising but not representative of Drews’ dominance. A try moments after halftime setup by one of our best on the night, Teddy Wilson, ensured Drew’s dominance would continue for the rest of the game. Oskar Mitchell iced the game with a pilfer 15 metres from Paul’s try line leading to the final try of the night by fellow third-year Olly Whiteley. The final score of 45-10 was an exclamation mark to finish one of the most dominant Rawson Rugby campaigns in recent memory.

While in the final only 23 made the field, it is important to note that across the campaign there were 33 boys who had the privilege to represent Drew’s and their contribution was integral to the success of the campaign.

Finally, a big thanks must go to the coaches Nick Ryan, Angus Allen and Vincent Creagh for leading yet another Rawson Rugby campaign and Principal Wayne Erickson for coaching the work behind the scenes that led to our scrum dominance.