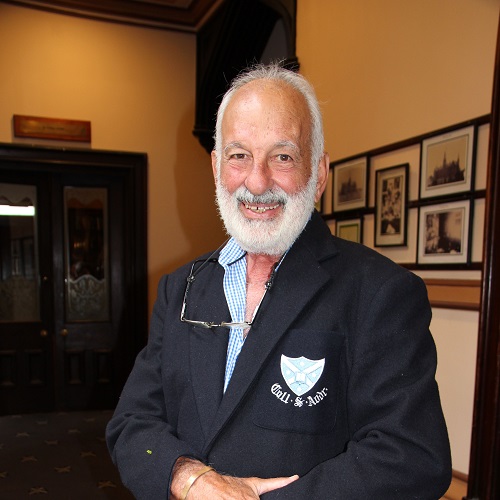 I made the most wonderful friends and it was a wonderful part of my life.

Arthur is originally from the rural town of Gundagai, NSW. His parents (who are of Greek descent) ran a cinema for many years and although were not doctors themselves, were keen for their son to become one. Arthur, however, was not as inclined, largely due to the fact that he was not a fan of the sight of blood. With his parent’s encouragement, he did agree to attend university and eventually decided on Economics at the University of Sydney. For his first year he lived in a boarding house in Stanmore. He had some friends at St Andrew’s and so attended some of the informal events (some more eventful than others as Arthur may tell you). With encouragement from his friends and a clear interest in the College, Arthur met with then-Principal Alan Dougan, to enrol. In 1957, his journey as an Andrew’s man commenced. Arthur was involved across various sporting teams including rugby, rowing and athletics and he even returned to the College later on in life to coach the Rawson Rugby team.

Arthur uses words such as ‘wonderful’, ‘favourite’ and ‘happy’ to describe this part of his life. He speaks very fondly about the College and of the lasting friendships that came out of his time here. Many of Arthur’s friends from St Andrew’s attended each other’s weddings and still catch up in person or via the telephone today – they are firm friends for life. Arthur’s connection with the College continued when his son Alex attended in 1992 and then with the grandson of his then-neighbour who Arthur told about St Andrew’s and who subsequently attended the College in 1997.

Arthur’s support for the College extends to philanthropy as well, and he has made gifts to the College more than 25 times over the past 15 years in a display of incredible generosity. The College is very grateful to Arthur for his ongoing support. He has supported several different causes over the years, from Capital Works, Annual Giving Programs and the General Fund and is a current member of the College’s 1867 Circle. However, given he originates from a rural town himself, the key area that Arthur consistently supports is the Rural & Regional and Indigenous Scholarships. He so fondly recalls his time at St Andrew’s that he wants to enable ‘others to have the chance to experience it’.

Arthur has supported the College not only with donations but also with his time over the years. He and his wife, Judith, return annually to the College for the Alper Lunch, which he organises with fellow friends of the late Geoffrey Alper (Fr 1956) as a way of celebrating his memory and reminiscing on their time at College. Arthur also helps to organise the players at the Annual Golf Day each year, and is a regular at the Rawson Rugby Finals, at which he can be seen sporting his College Blazer (as pictured) and a cheeky smile. He is a highly valued member of our alumni community and we look forward to his continued connection with the College for years to come.