We have recently loaned one of the College’s important ancient artefacts — our 4100-year-old cuneiform brick — to the new Chau Chak Wing Museum at Sydney University. Cuneiform is probably the oldest writing system in the world, even older than Egyptian hieroglyphics. We are delighted that it is now on display for all to see, free of charge.

This is a special brick. It was made between 2112 and 2004 BCE in the Middle East at Telloh/Girsu in Iraq. The ancient Sumerians, like the Babylonians, were a wealthy and powerful civilisation who prospered thousands of years ago in the fertile regions around the Tigris and Euphrates rivers. Because there was not much stone or wood in this area, the Sumerians built their buildings from mud bricks. They constructed enormous step-sided pyramids called ziggurats as temples for their gods. Our brick is one of thousands of foundations stones from these ziggurats which has been inscribed with a prayer. However, unlike most bricks of its kind, ours has a large and beautifully legible inscription. It reads, ‘To Nin-Girsu his god, Gudea priest-king of Lagash… his temple in Girsu’. It would have been laid in the wall with the inscription hidden so only the gods could read it.

Our special brick is made more special by the way it came to College. It was brought back to College in 1939 by College Fellow, Councillor and lecturer in the Theological Hall, the Revd. Professor Samuel Angus after a trip to North Africa and the Middle East when he spent time working in the Iraq Museum. Dr Angus was an incredibly learned scholar of Ancient Mystery Religions and an ‘almost-heretic’ in the Presbyterian Church. Indeed, the inquisition into Angus’ orthodoxy was quite the cause célèbre. Educated at Queen’s University, Belfast, Royal University of Ireland, Princeton, and Berlin holding Doctorates in Letters, Divinity and Philosophy, this Ulster Scot was one of the most humane and erudite people to be associated with St Andrew’s. He was also for a time the Curator of the Nicholson Museum where his brick is now on display. Here is his entry in the Australian Dictionary of Biography:  http://adb.anu.edu.au/biography/angus-samuel-5032.

Below is a picture of the brick in its new ‘holiday home’ as well as a photograph of Samuel Angus in Girsu from the trip where he acquired it.

Free tickets can be booked to visit the exhibition here: https://www.sydney.edu.au/museum/ There is a wonderful exhibition of Indigenous artwork and cultural artefacts, the spectacular Mummy Room which tells the stories of their Ancient Egyptian mummies, and a remarkable natural history display.  There are also some very thought-provoking displays that combine items from the ancient world, natural history and the University’s art collections, organised around themes like ‘Love/Sex/Death’ and ‘Exploration/Trade/Colonialism’.

You can find our brick in the ‘Towns Cities Empires’ display on the bottom floor.

We owe thanks to Dr Jamie Fraser (formerly Curator of the Nicholson Museum) and to Dr Paul Donnelly (Deputy Director of the Chau Chak Wing Museum and Residential Fellow at The Women’s College) for making this loan possible. 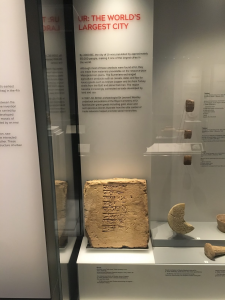 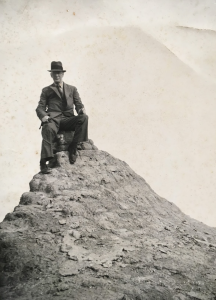