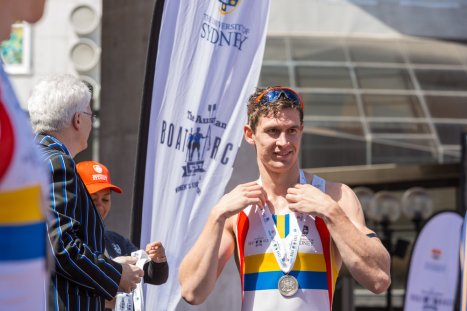 David Bartholot (Fr 2015) began his rowing career by a fluke encounter with a local rowing enthusiast who saw Bartholot’s 193cm tall build and knew that he’d make an excellent rower. Bartholot wasn’t immediately taken by the proposal to try out for the surf boat crew at Crowdy Head Beach. His career in rowing didn’t eventuate until David spent his first year of university at Wollongong University and noticed the lack of rowing opportunities in the area. David rang the University of Sydney to inquire about the possibility of rowing for Sydney University Boat Team. He then moved universities and homes interstate to be involved with the University of Sydney both academically and culturally. Bartholot recently completed in the 2018 Australian Boat Race, but before this year’s race, he competed in the 2016 Australian Boat Race. The year after he became a St Andrew’s Man.

Perchance, David applied to St Andrew’s College in the semester before the Tony Damian Scholarship was introduced. The Tony Damian Scholarship was pledged to support students from a regional or rural home who needed to study in Sydney, and as David was raised in Forster on the NSW Mid North Coast, he was the perfect applicant for the scholarship. David became the first ever recipient of the Tony Damian Scholarship in 2016. He left Drew’s at the end of 2017 but the wider community still follows and support his endeavours. Click here to read Matt Cleary’s excellent coverage of David’s Rowing Journey thus far: https://www.australianboatrace.com/news-to-link/2018/10/12/all-in-to-win-the-australian-boat-race