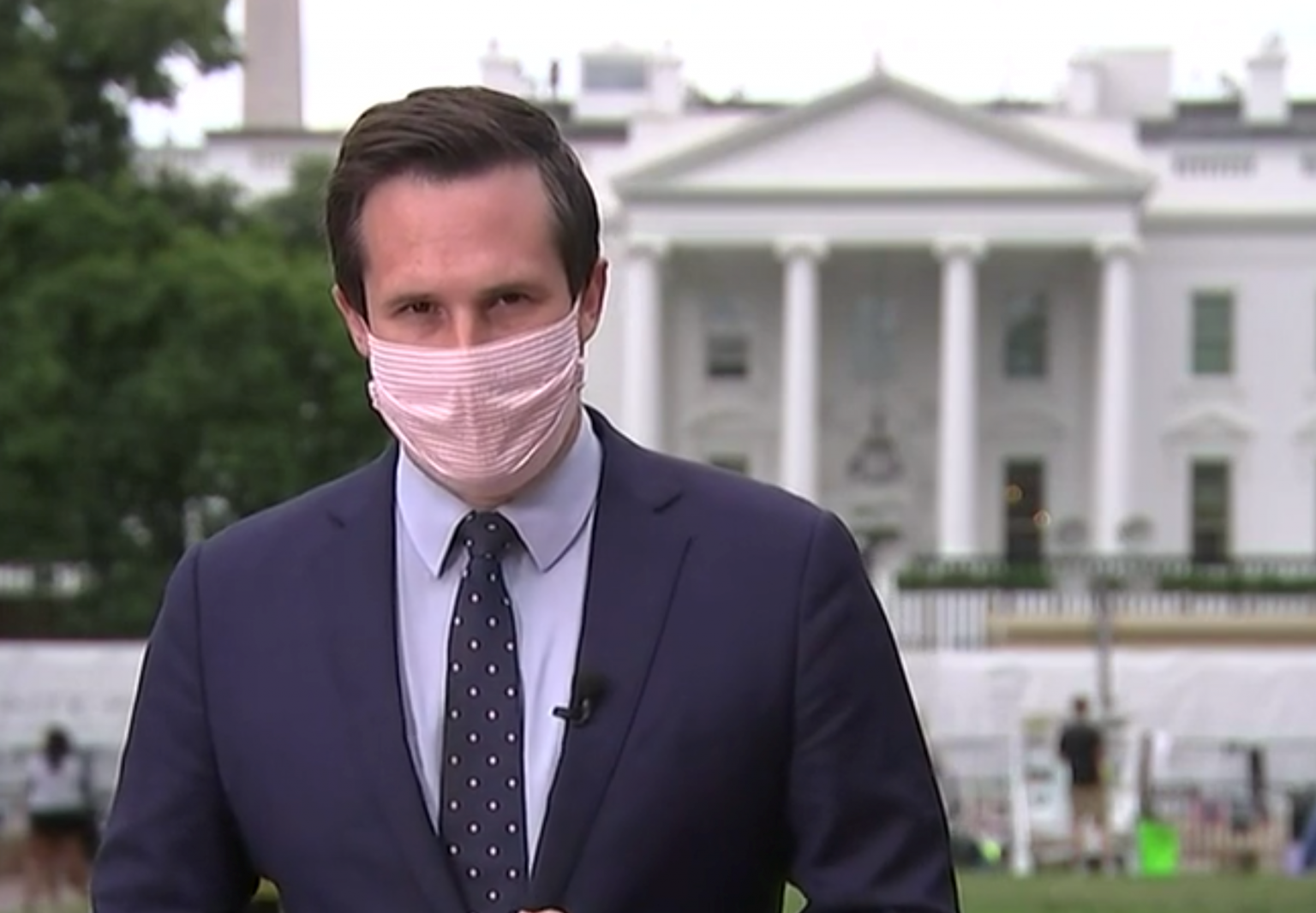 James Glenday (Fr 2004) is a political journalist at ABC News. He has recently returned from five years abroad, where he worked as a Foreign Correspondent in both Europe (2015-2018) and North America (2018-2020). James has won several journalism awards, including the prestigious Andrew Olle Scholarship. James talks to us about his experience at College, working as a foreign correspondent and life in America amidst the COVID-19 pandemic.

Where are you originally from and where did you grow up?

I grew up in Dubbo but my family all live on the South Coast of NSW. I like living in rural and regional Australia. Canberra, my current home, is a bit of a compromise. If I can convince my wife, one day I’d like to live on a farm.

I needed somewhere to stay in Sydney! A college representative came to one of my classes and said they were trying to attract more public school kids from regional towns, so I applied. I had absolutely no idea what to expect and knew nothing about College life.

I played cricket and soccer but was involved in as many events as I could be.
Fondest memory of college?

The close, lifelong friendships. I still catch up with friends from St Andrew’s and regularly run into people who lived at the other colleges around the same time as me.

How long have you been a foreign correspondent with the ABC?

Five years. First in London and then in Washington DC. I’ve recently returned to Canberra.

What are some notable events you have covered during your time overseas?

Brexit, the many terrorist attacks across Europe, the 2018 FIFA World Cup in Russia, the Anzac Day centenary at Gallipoli, Donald Trump’s impeachment, plus quite a few major elections, massacres and natural disasters.

What has been the most memorable story you’ve covered during your career?

There have been quite a lot of events I’ve covered that have been memorable for the wrong reasons.

During my time overseas I went to a lot of shootings, natural disasters and terrorist attacks where many people died. They were all tragic and sad, and some of horrific things I have seen in person, heard from witnesses or watched on raw mobile footage will stay with me forever. The attacks in Nice and Barcelona, where heavy vehicles mowed down pedestrians, were particularly difficult to cover and for years afterwards I couldn’t comfortably sit at an outside café.

Probably the most shocking thing I’ve witnessed though was the Grenfell Tower fire in London in 2017. We were on the scene early and watched as the flames engulfed the top floors, burning many people to death. I can still clearly remember the sounds and the smell. It still seems inexplicable and hard to comprehend how the fire could have spread so quickly and been handled so badly in one of the richest parts of the UK and the world.

One of the things I love about being a journalist is that you cover a lot of different things and I’ve been very fortunate throughout my career to have reported from dozens of countries and from many different parts of Australia, filing on everything from the canonization of Mother Teresa, the El Paso shooting and federal politics to interviewing Boris Johnson, Hugh Grant and Peppa Pig. (Boris and Peppa were both very charming).

I was based at Parliament House for much of the leadership turmoil during the Rudd-Gillard-Rudd-Abbott-Turnbull period, while my first ABC role was in Darwin, where I got sent to many remote parts of Northern Australia.

What has been the biggest challenge of being a foreign correspondent?

The long hours, the constant travel and spending so much time away from your family. It’s a big part of the job and probably hardest on spouses. My wife was pregnant with our second daughter when our crew got followed in Moscow ahead of Russia’s presidential “election” and she was unsurprisingly worried about our welfare.

Overall it’s a wonderful job though and I’m very privileged to have had the opportunity.

Due to budget cuts across all local media organisations and the expansion of big international media companies, Australian foreign correspondents may soon become a thing of the past.

Some people would argue this makes financial sense in an increasingly global world but I think in the long-run we will miss hearing an Australian perspective on overseas events.

What was it like living in America during the COVID-19 pandemic?

Surreal. Donald Trump dominates a lot of the coverage you see in Australia but I think a pandemic would have been very difficult for the US to deal with at any point in history. It’s a massive, diverse country that values individual rights and freedoms highly, so draconian lockdowns, travel restrictions and fines are always unlikely to get much support.

Right now, however, the country is especially polarised and it was strange to see how even something as simple as advice on face mask-wearing became such a politically charged issue.

At a personal level, the pandemic and initial lockdown had a huge impact on our neighbourhood in Washington DC. Schools, parks and shops were suddenly closed, huge numbers of people lost their jobs, we knew several people who got sick and many of our friends with kids moved away to be closer to their families. Then a few months later, widespread Black Lives Matter protests erupted. Although they were mostly peaceful, there was looting, clashes with police and vandalism in our neighbourhood.

Overall though, living in the US again was a really great experience. It is a wonderful country and there are many parts of American life that Australia can learn from.

We notice that you’ve recently returned from your role overseas. What motivated this return to Australia, and what is next for your career?

After five years away and in the middle of a pandemic, it was time to leave.

I would have liked to have stayed for much longer. The US is a fascinating country, Washington is a fascinating place and I loved my job, but my family has sacrificed a lot for my career over many years and it was time to put them first.

Right now, I’ve got a substantial amount of annual leave owing and so I am taking a lot of it and planning return to a role in Canberra in February.

What are you reading, watching and/or listening to now that you would recommend to others?

I am reading Gideon Haigh’s ‘Cricket In Mind’. I would recommend it to anyone who is a bit of a cricket tragic.

My time in quarantine coincided with the end of the Brumbies’ season, which was great, and I’ve been watching a lot of rugby league. It’s more entertaining than I remember, though it was disappointing to see the Rabbitohs and Raiders lose in the same week.

A few years ago an FBI employee we interviewed recommended The Bureau, a French spy-thriller which is on SBS On Demand. I have finally gotten around to it and it’s actually pretty good and apparently fairly realistic.

I’ve also been watching legal drama Suits. I’m not sure why, it’s not great. I covered the royal wedding of Harry and Meghan at Windsor and one of my colleagues raved about it. Two stars at best.

On long drives, I usually catch up on a few episodes of The Daily, the New York Times podcast, though I also recently binge-listened to the Missing Panther Podcast, a series about alleged Panther sightings in the Australian bush. You might enjoy it if you’re from the Blue Mountains or central west.

I also have two young girls, so I can probably recite most episodes of Bluey from memory.

I wouldn’t give any. There are plenty of people who will give better advice than me.

When I started at the ABC as a cadet, a very senior journalist and presenter told us, “don’t complain and never explain”.

Another said, “no matter what you’ve done, you’re entitled to absolutely nothing. If you want something, you’ve always got to work for it.”