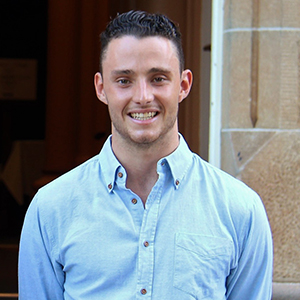 James Matheson is an Olympic freestyle skier who recently competed in the 2018 Winter Olympics in Pyeongchang. He is currently studying a Bachelor of Commerce with a double major in Finance and Marketing at the University of Sydney.

James developed an interest in skiing from a young age – he was fortunate to have had many family holidays at ski resorts since the age of four. He competed for The Scots College in Interschool competitions and then started competing at an international level. Skiing professionally has taken him around the globe to countries such as Finland, China, Korea, USA and many more. He loves the high competition involved in skiing and the places it’s taken him or the people he met along the way.

Soldiering through a back injury in the recent Winter Olympics, James still describes the experience as amazing – “I ended up with the second best result of my career skiing into the finals of the event”.

James chose to reside at St Andrew’s College because of its reputation having the ‘best of the best’ in an individual’s field. He wanted to be in an environment of young, successful and driven people, saying the College exposed him to people from all over Australia and the world. He describes the atmosphere of the College as “an extremely motivating environment to be in”. Having fellow students in the same position as him allowed him to build a support network he encourages all Androvians should take advantage of.

One of the biggest positives from the College is the support network you develop from your direct peers and the wider College.

James describes juggling sport, studies and College life as difficult. His advice to students is to set short and long term goals and be willing to sacrifice things that don’t align to these goals.