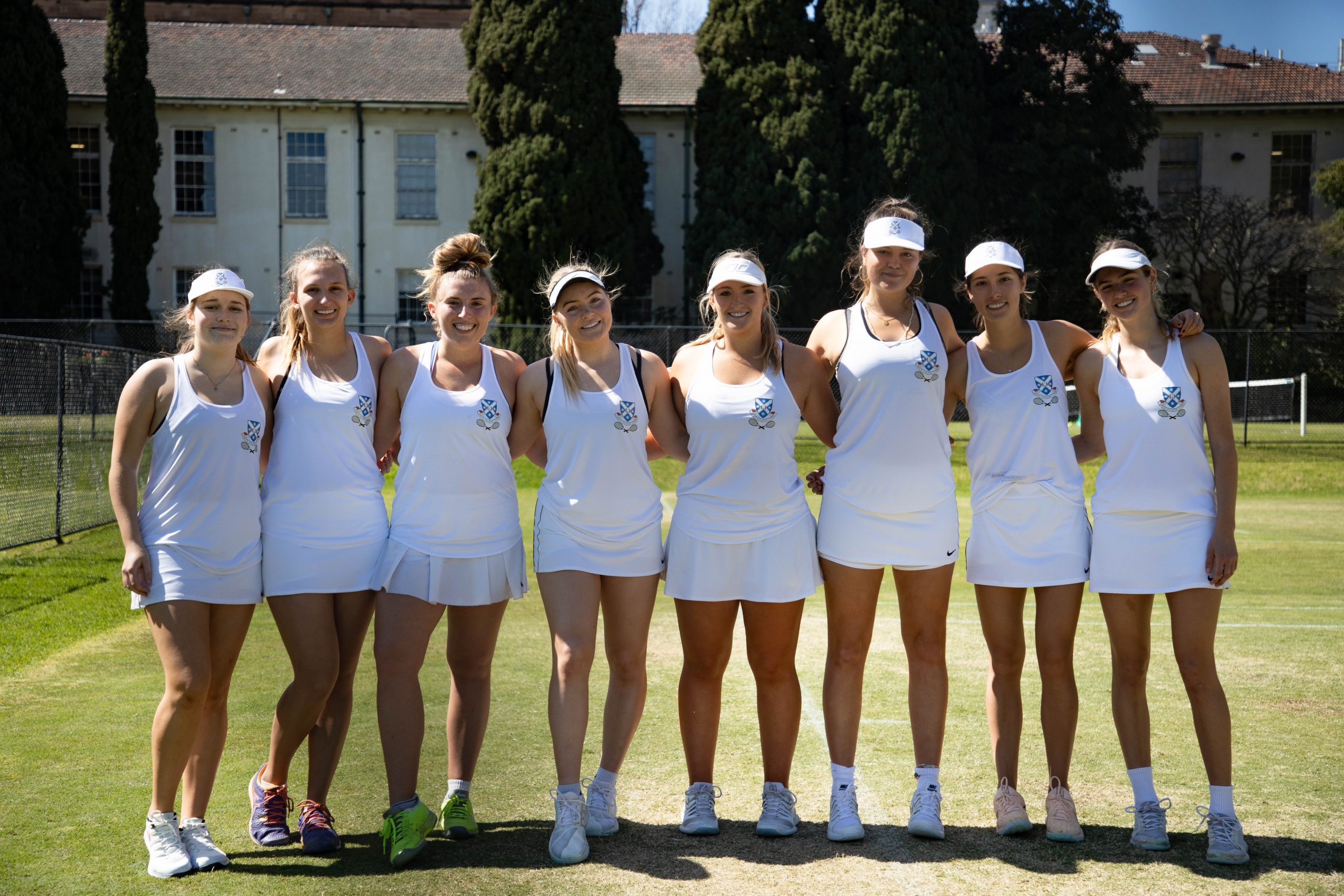 Our 2020 Rosebowl Tennis campaign started off extremely well for the Andrew’s women, with a dominant win over Sancta Sophia College. There was an abundant pool of talent to choose from this year and the team was comprised of an extremely dedicated squad of eight girls. The Drew’s women won all matches against Sancta without dropping a set. Strong doubles performances from Liv Bird, Kristina Lane, Amber Arnold and Bianca Hickey saw that we were up 2-0 matches after the doubles. Our team strongly followed up the doubles wins with singles wins by Liv, Amber, Kristina and Grace.  This victory lead the team to its next fixture against St John’s.

After a postponed match, our women had to adapt to the new conditions they were dealt with having a game moved to the following week. We took to the court in the same fashion, with steely determination. Liv and Kristina won their doubles in straight sets without dropping a game and was followed by a gutsy win by Grace and Amber claiming the second doubles. Our women then remained determined and focused, backing up the doubles wins with winning all of the singles rubbers.

The Wesley game followed, which saw equally dominating performances by our Drew’s women. Following Liv and Kristina’s doubles win, Grace and Amber put on a stellar performance to win their doubles in the tiebreak, putting Andrew’s in a strong lead to continue the round. Once again, we did not drop concentration and won all respective singles against Wesley.

The game against Women’s was to be the closest game that Andrew’s played in the Rosebowl campaign. It was a culmination of all the hard work they had put in, as they worked off each other in the doubles, creating opportunities for their partner to cross and take the ball early at the net. The Women’s game initially saw Amber and Grace take the lead with a comfortable doubles win, whilst Liv and Kristina were still battling their game out on the court beside them. After claiming the first set, the girls went down in the second set to put the match into a super tie-break. With an incredibly tight scoreline in the super tie-break, the Kristina and Liv managed to stay composed and pull off some bold plays as they took to control the point through remaining vigilant as the volleyer. This saw Drew’s winning the match and up 2-0 after the doubles. Tough singles losses and an incredible win by Bianca Hickey saw the scoreboard at 3-3 with the deciding doubles to be played by Bianca and Sabby Mann. Bianca showed domination in the first set with her serve, paired with Sabby’s volleying, they were unmatched, enabling us to win the first set. However, Women’s pushed the match to a super tie-break by claiming back the second set.

Despite a gutsy performance by both Bianca and Sabby they went down in the super tie-break losing only by a few points which saw Drew’s come in second place. The tenacity and strength that the Androvians displayed in their training and performances must be credited to their pride in College and commitment to the team. I could not be prouder of the Rosebowl team this season; the way they conducted themselves on and off the court is both admirable and commendable.