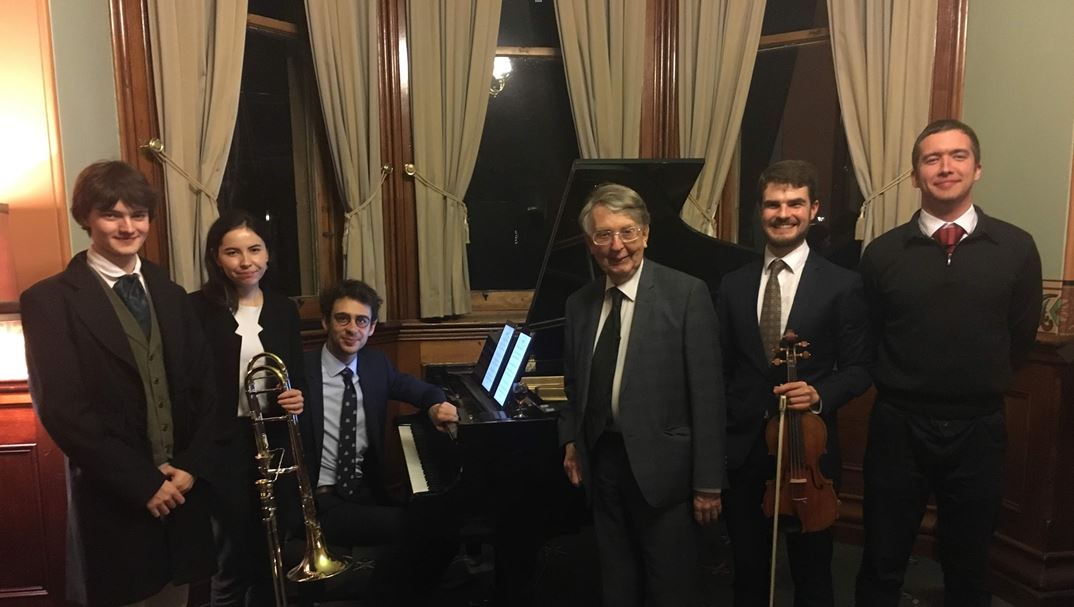 An enthusiastic band of musicians and music lovers congregated in the Reading Room following formal dinner on Monday the 6th of May for the Senior Common Room’s first music evening of 2019. The inimitable Alex Wright graciously welcomed our guests, including Principal Wayne Erickson and Adam Jacobs, founder of The Iconic; and generously broke the ice with his smiling distinction between the ‘concert’ paradigm and our (deliberately named and comparatively informal, fourth-wall-bereft) ‘music evening’…

Thusly freed from the yoke of institutional expectation, Dean of Admissions Will Cesta and Artist in Residence Ben Adler opened the evening on piano and violin with songs heretically stolen from other instrumentations: the effulgent first of Mendelssohn’s Songs Without Words, originally for solo piano; and Schubert’s sublime lied “Du bist die Ruh” (You are repose).

Resident organist and composer, Titus Grenyer, then introduced us to his most recent acquisition, a 1912 harmonium that looks disarmingly like a 1912 suitcase. With impressive coordination between calm fingers and (at times furiously) pumping legs, he played a short piece by early twentieth century German composer Sigfrid Karg-Elert that may well have been played by the harmonium’s first owner; followed by the premiere of his own beautiful work, “Winter Sketch No.1”, which educed rich and poignant harmonies from this most fascinating of instruments.

Senior Fellow Ian Jack and Ben Adler followed with a rambunctious rendering of Dvořák ‘s rustic Sonatina op.100 for violin and piano. Written for the composer’s children, the music nonetheless traverses a wide emotional terrain, encouraging (ever so gently) reflection on the arbitrariness of labels, in the context of what might differentiate a ‘sonata’ from its diminutive, the ‘sonatina’…
The wordless songs that opened the night were then furnished with their complement in the songless words of Michael Sligo, who enthralled and impressed his audience with a dramatic (and memorised!) recitation of a (substantial!) excerpt of British Romantic poet Thomas Babington Macaulay’s ancient Roman epic, ‘Horatius’.

From the grandly heroic to, in the words of Alex Wright, “beauty without grandeur”: Judith Browne treated us to a mesmerising rendition of contemporary British folk singer Laura Marling’s “Goodbye England”, with which she had placed second in the Palladian solo vocal competition weeks before. Judith sung and lightly strummed her guitar with a rare honesty and vulnerability that left her audience transfixed.

Will Cesta then returned to the piano with the wordless Romantic epic, Chopin’s Ballade op.23 in g minor. Another spell was cast over the fortunate gathering as we journeyed on a fantastical odyssey through the human experience, from dreamy awakening to impassioned rage to euphoric love to inexorable tragedy.

Two hands were traded for four on the piano as Titus Grenyer joined Mei Zheng for a spirited and highly synchronised palate cleanser in the form of Schubert’s Polonaise op.61/1. Mei followed with a sassy solo performance of Gershwin’s jazz-infused first Prelude. (Mei must also be acknowledged for creating the scintillating floral border artwork with which all future Senior Common Room propaganda will be embalzoned.)

Peerless power couple Minami Takahashi and Will Cesta then brought the evening full circle with more stolen songs: another Mendelssohn Song Without Words; and a stunning selection from Schumann’s ‘Dichterliebe’. Minami imbued the trombone with an expressive, colourful lyricism rarely heard professionally; and her ensemble with Will, especially in the triumphant “Ich grolle nicht” (I bear no grudge), transported their audience. To conclude the evening, Ben Adler rejoined them for a galloping delivery of Schubert’s tempestuous “Erlkönig” (Erlking), arranged specifically for the occasion and its most unconventional of forces.