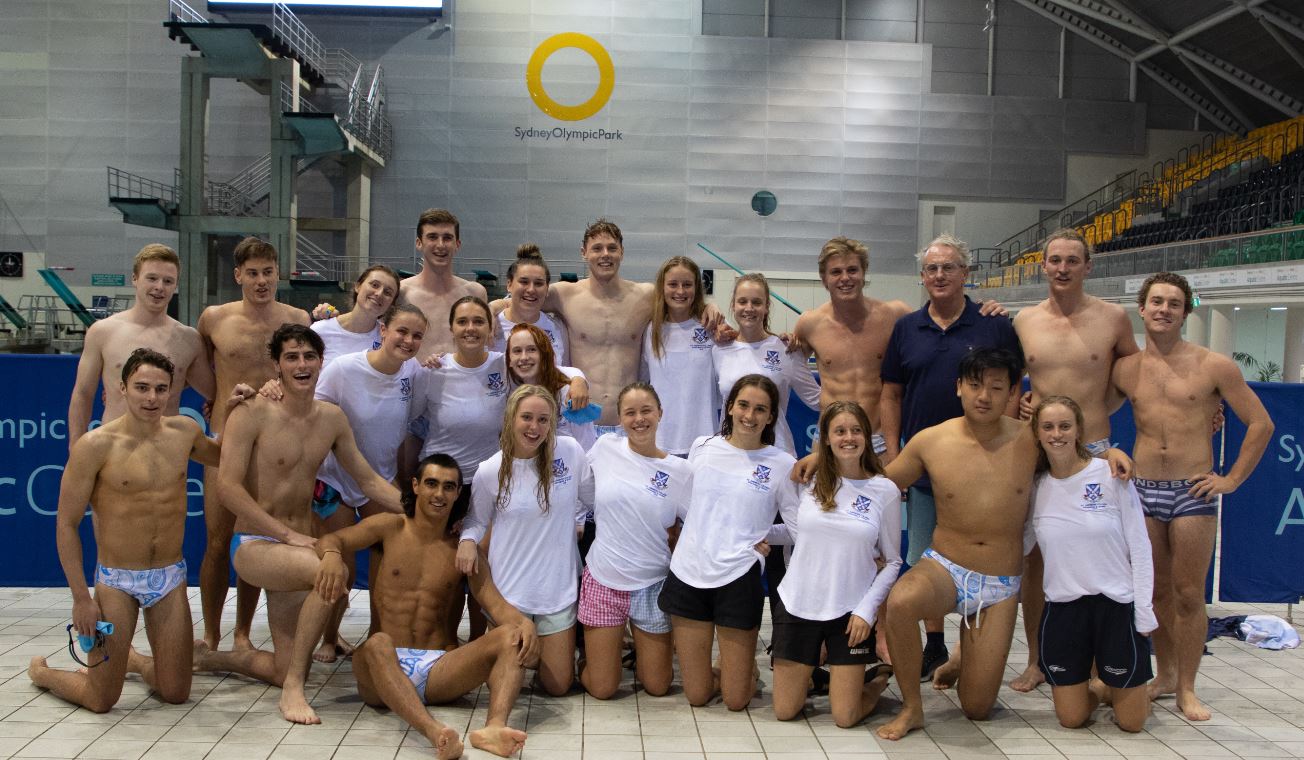 On the 2nd of April 2019, St Andrew’s College competed in the annual Rawson and Rosebowl Swimming and Diving competition at the Sydney Aquatic Centre.

Starting off with the 50m freestyle, the women put in a valiant effort against some very tough competition. Amy Van Dongen (Fr 2017) finished in 2nd place, and Lucy Fenwicke (Fr 2019) finished in 4th  place. The 50m breaststroke showed our athletes shine as they took out both 1st place (Lucy Fenwicke) and 2nd place (Mekayla Everingham), a result that would be observed many more times throughout the night. The 50m butterfly saw Lucy Fenwicke continue to dominate with a 1st placing, while Rosebowl Swimming Secretary Maisie McFadyen (Fr 2018) narrowly missed out on a podium finish at 4th place. The 50m backstroke was taken out by Amy Van Dongen in 1st place with a strong finish, and 2nd place by Amy White (Fr 2018), who was not far behind. The 100m freestyle followed a similar pattern to the previous race with Lucy Fenwicke taking out first position, followed closely by Beatrice Hobson in 2nd place.

The 200m freestyle continued the trend as Amy Van Dongen claimed 1st place and Sophie Saunders had a last-lap burst and claimed 2nd place. Both the 400m freestyle and 200m Individual Medley were undertaken by Maisie McFadyen and Mekayla Everingham, placing 1st and 2nd respectively in both races. The frustrated sighs of the Women’s College supporters were audible as the race finished. The 4x50m Medley relay was comfortably won by the Drews women, and the 4x50m freestyle relay was hard fought, with the College claiming 2nd place. The diving team, consisting of Lucille Williams (Fr 2018) and Jess Owens (Fr 2017) saw the Rosebowl team claim victory with great technical skill in the Diving portion of the competition – Lucille placed 1st and Jess placed 2nd.

Overall, the Rosebowl Swimming and Diving teams were crowned victors of the night, with an accrued total of 183 points. The next closest was Women’s on 87.75.

The Drews men had a similar start to the women, with Fresher Jack Chenoweth taking out 2nd place against some strong competition in the 50m freestyle. The 50m breaststroke saw Rawson Swimming Secretary Hugo Mackenzie-Wood (Fr 2018) place 2nd, and Quinn Robinson (Fr 2018) place 3rd. Quinn competed afterwards in the 50m butterfly, where he dug deep and managed to obtain 2nd place. The 50m backstroke saw Jack Grant (Fr 2018) put his long limbs to good use and secure a 3rd place; Jake Jones (Fr 2019) wasn’t far behind as he secured 4th.

Josh Simat (Fr 2017) had a big day at the individual races, taking out the 100m, 200m and 400m freestyle as well as the 200m Individual Medley, much to the annoyance of the Paulines to the left of the Androvian crowd. The relay teams in both 4x50m medley and 4x50m freestyle, were won by the Drews men in nail-biting fashion: the Medley team won by 0.03s after coming from behind, overtaking the Johns team at the finish line, while the freestyle team won by an even narrower margin of 0.02s (once again to the dismay of the Paulines).

The diving team of Rory Cheal (Fr 2018) and Tom Galvin (Fr 2016) demonstrated what hard work and speedos can do. Both placed 1st and 2nd respectively. Overall, the Rawson Swimming and Diving teams were crowned victorious with 154 points, next closest being St Paul’s on 114 points.

It was an enjoyable night with some very impressive performances from Drews men and women. Many thanks must also go to the volunteers who stayed behind the scenes and ensured the smooth running of the events. These victories are a strong contribution to the maintained ownership of both the Rawson and Rosebowl Cups for 2019, and we hope to see the athletes enjoy their well-deserved Victory Dinner.