As work proceeds in the Old Library, re-cataloguing and re-shelving both the College’s main collection and the important Theological Library, this week’s throw-back Thursday features the history of our ‘Bibliotheca’. St Andrew’s was the only Sydney College to be built with a library from the start and our archives preserve receipts from the first purchases of books, including a copy of Charles Darwin’s ‘On the Origin of Species’ – and enlightened choice for 1874.

Except for a period of twenty years between 1940 and 1960 when it was pressed into service as the Chapel, the noble, double-height room in the North-West corner of College has always been the Library. Homer, blue-robed and blind, stands between his peers – Dante and Chaucer – in luminous stained glass at the front of the hall and Scotsmen, Robert Burns, Walter Scott and the Ettrick Poet, join Milton and Shakespeare as the Old Library’s silent guardians. Under its fine printed-silk ceiling, all learning seems within reach and one is reminded of the great attainment of students: the ability to play gracefully with ideas.

Handling every single book gives one a sense of the collection as a whole. One might say that ours is not a didactic collection; it shows no attempt to change the minds of its users. Rather, it is a working collection, designed to support the intellectual labour of students and scholars. This is, perhaps, unsurprising given the way it has accreted through donations and acquisitions. Its strengths are in history and the literatures of the French, German, English, Latin and Classical Greek languages.  This is supplemented by a great depth of material on Pacific cultures and languages, from Polynesia to New Zealand. Such a collection made the necessary complement to the College’s Hunter Baillie Professor of Oriental and Polynesian Languages. However, some of the greatest treasures of the Library are the archaeological works from the Near East.

That is not to say, however, that the Library is all serious and scholarly. It contains many gripping works of literature from Virginia Woolf to Evelyn Waugh. The librarians were particularly pleased to find Kingsley Amis’ ‘Lucky Jim’, described by Christopher Hitchens as one of the funniest books of the 20th Century.

Part of the ongoing project in the College Libraries is to build a complete register of all inscriptions and bookplates in our collection. Such a database will give us a unique insight into the intellectual history of the College and allow us to trace the scholarly networks that flowed through this place. We have so far been able to piece together connections to such luminaries as the classicist Sir Richard Jebb, and the Professors John Woolley, William Woodhouse, and Samuel Angus. However, one of the great lessons from this work is just how multi-lingual our students were in the 19th and early 20th centuries.

In the process of sorting the main collection, Assistant Librarian, Daniel Hanigan, found a book by the distinguished archaeologist V. Gordon Childe who had been forced to resign from College in 1918 due to his communist activities. It was inscribed ‘From Gordon Childe, 14.vii.56’ to Mary Alice Evatt, the wife of his College friend and third President of the United Nations, Bert ‘Doc’ Evatt.

It is hoped that by restoring the shelves to Dewey Decimal order and digitalising the catalogue, we will make the library more useful and accessible to all members of the College community. In the shelves of our libraries we are fortunate to house a great ‘college of minds’ drawn from the antique world to the coffee houses of the Edinburgh Enlightenment and beyond. There is much mirth and pleasure to be had in the company of so many ‘dead contemporaries’ yet living in the pages of their books.

Dean of Studies and Assistant Archivist 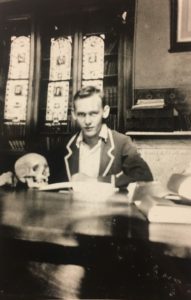 Pictured: (left to right) A student and Yorick: melodrama in the library c. 1920 (J.G Stephens Collection) and the College Library in 1960 and in the present day;.