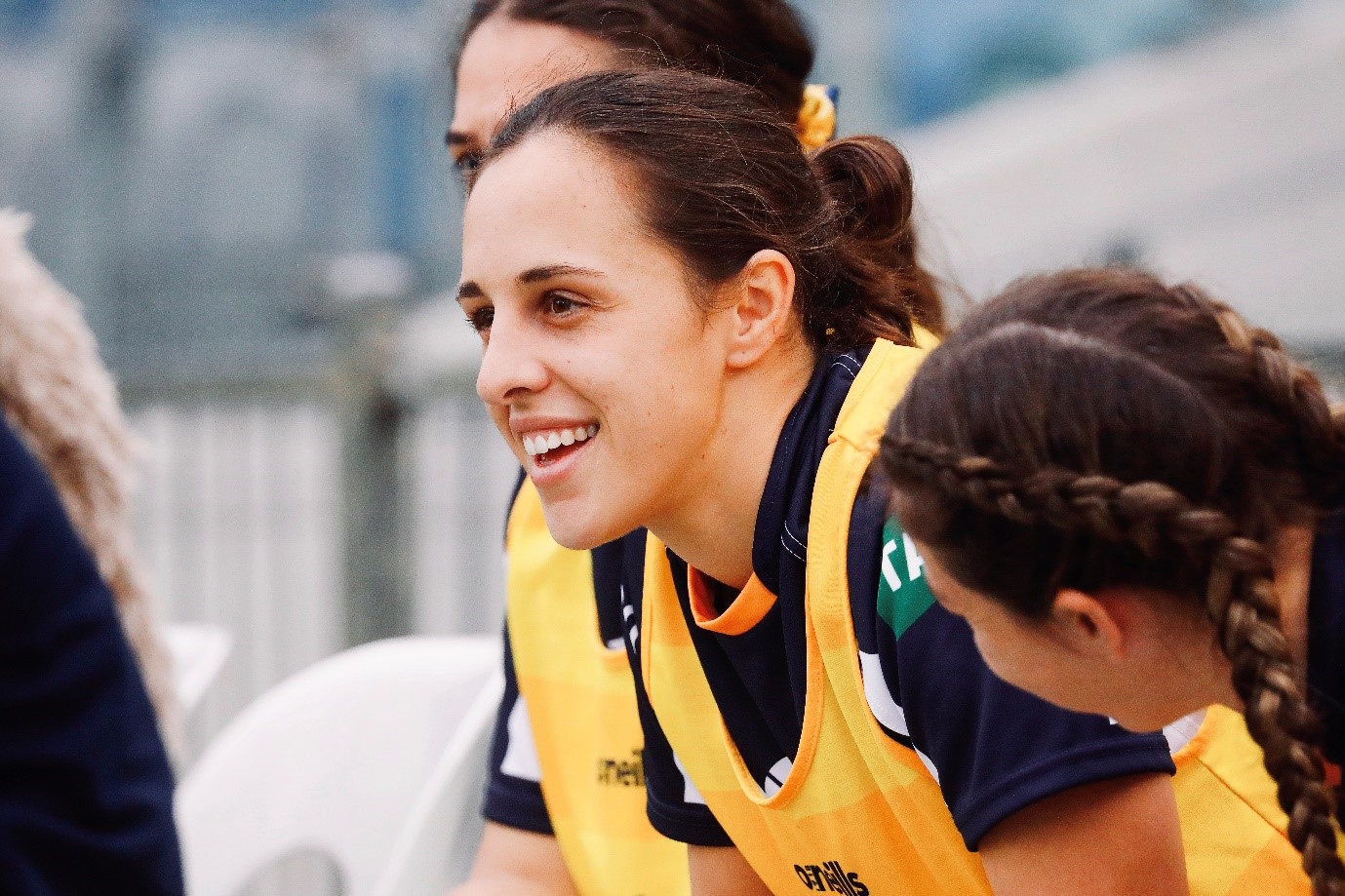 Susannah Cooke grew up in Yass and came to College in 2016 becoming St Andrew’s College’s second female Senior Student in 2018. She is now both studying medicine at Newcastle University and playing rugby for the Brumbies in Canberra. Susannah talked with us about College women’s rugby, leadership and balancing a very busy life.

I grew up on a property just outside of Yass, NSW where my parents have been for 23 years now. I was very lucky growing up on a farm, having that active, hands-on childhood experience and where there was always lots to do.

What were your favourite memories and what parts of College life were you involved in?

My favourite memories of college mostly centre around being with some of the best people you will ever meet. Whether it was sitting out on the Glen for lunch, a big highlander night or crawling to the dining hall for some hash browns the next morning; all of them were the best memories with some very great people. I particularly enjoyed our Valedictory dinner in 2018 with Liv Peck and Liv O’Connor who were the secretary and treasurer at the time. 2018 was a massive year for us as leaders of the college and being able to celebrate with everyone and reflect on what we were able to give back to the college in our time there was a very special (and big) night. Another one was the feeling in the changing rooms of No.2 Oval after the first women’s rugby 7’s match; there was a smile from ear to ear on every single one of the girl’s faces (paired with a nice bruise on their legs).

How has St Andrew’s influenced your life after College (if it has)?

Drew’s was a big part of my life for the three years I was there. Those years straight after leaving high school are obviously pivotal years in growing up and learning more about yourself as a person and where you want to go in life. To spend those years at Drew’s surrounded by great people to guide me along the way helped me become the person I am today; full of ambition. Specifically, I learnt the art of managing study with social life, communication skills and how to adapt to my audience, and most importantly I now have a great group of friends who I met across all years in college whom I would have possibly never come across if it weren’t for Drew’s.

You were influential in introducing women’s rugby 7s (Chugby) to the intercol landscape. In 2022 St Andrew’s held the second official competition for women’s rugby 7s. How does this make you feel and what were some of the challenges you faced in starting up this movement?

Seeing the 2021 women’s 7’s tournament made me incredibly happy. Since before it all began, I knew so many girls would get a lot from a competition like this and knowing how much joy I get from rugby, I wanted other girls to have that opportunity as well. To create something like this doesn’t come easy though and I am so proud of all the women that have helped over the years to get it to where it is this year including Maddy McCathie, Annabelle Martin and Molly Sanders. There were plenty of challenges, particularly fighting against the notion held by some that women shouldn’t be playing contact sport but with help from people like Wayne, we got it across the line. I am very grateful for all the women who played in the first year, who mostly didn’t have the faintest idea of what rugby was, for running out in front of a big crowd and just having a go. Watching in 2021 I was also filled with a sense of hope that we as a college community are playing our part in addressing the massive gap that exists in women’s sports participation after they leave school. I can imagine the 7’s competition will only go from strength to strength and I’m very grateful to have played a small part in that back in 2018.

How did you see the College change for women whilst you were there? And have you noticed any further changes since you left?

I think each year the College changes for the best in a lot of areas and I witnessed that change for women over the three years I was there. That’s not to say there wasn’t times when I was deeply saddened or frustrated by some things, but these instances were mostly the result of one individual’s behaviour and wasn’t a reflection on the wider college culture. How the college dealt with it was a more accurate reflection and as a leader in 2018 I was proud of our culture and how we responded to behaviours that didn’t align with our values. I believe the house committee hold a large portion of power to set the tone for the attitudes/behaviours that are acceptable. This means each year there is opportunity for bad behaviour to be tolerated among peers if there isn’t a genuine, consistent attempt from the leaders to instil a good culture. From what I’ve heard the leaders have done a great job over the last 3 years and I hope there continues to be a sincere effort to maintain the great culture.

You are currently studying medicine at Newcastle University and playing for the Brumbies in Canberra. How do you balance your university and sport?

I am so passionate about rugby and developing as a player so when the opportunity to play for the Brumbies came up, I knew it was one I couldn’t turn down. For our Tuesday training I would catch the 7am flight to Canberra from Newcastle, get the bus to Canberra Uni to study all day, train for 3 hours that night, catch the 6:30am flight back to Newcastle the next morning and make it to uni in time for my 8:30am tutorial. Driving/training/flying/busing between Canberra and Newcastle was incredibly draining and certainly wasn’t optimal for my studies or my rugby but running out in the 2021 Buildcorp Super W competition was one of the best feelings I’ve ever had so I’m very glad I saw it through. At the moment I’m focussed on developing my skills with the Hunter Wildfires in XV’s and 7’s in the Newcastle/Hunter region, to put myself in the best position for selection for the Brumbies this next season. It wouldn’t be possible without my partner and friends that helped get me where I needed to be, my family that have supported me since the beginning, my coach and a (reasonably) understanding university.

What do you think your next step is after finishing university?

After I graduate in 2024, I hope to continue playing rugby alongside completing my internship and residency years as I believe I am a better athlete and hopefully doctor when I’m doing both. After that I’m hoping to go down the path of orthopaedics where I can combine my passions for medicine and sport but for now, I’m just taking it one year at a time!

What are you reading/watching or listening at the moment that you’d recommend?

I am listening to a podcast called ListenABLE, which I would 100% recommend. It’s hosted by Dylan Alcott and Angus O’Loughlin who chat with people living with disabilities about their lives. Three months ago a close friend of mine studying medicine had a horrible skiing accident that has left him a complete paraplegic. So, I have been trying to learn as much as I can and the podcast has certainly challenged what I thought it would be like to live with a disability.

I am watching the 2022 Super W season every Friday and Saturday night to support the girls out there who manage uni/jobs/families alongside semi-professional sport that’s unpaid. I would encourage everyone to get behind watching women’s sport (whatever sport interests you) because every bit of support helps to better recognise female athletes on field success and edges us closer to commercialising their efforts.

For the 2022 executive team, I think they are at the great advantage because it may come somewhat more naturally to them to collaborate and share the load of the responsibilities that come with being the executive team. The game changer in our year was the teamwork between Liv, Liv and I. Putting egos and traditional role responsibilities aside, we genuinely worked as a unit with our house committee to make sure we were doing what’s best for the college and setting the standards we wanted the students of St Andrew’s to uphold. If they can work together and be proactive about all issues no matter how small that come up throughout the year, they will be incredibly successful. The college is lucky to have such a strong group of women lead them in 2022.

Is there anything else we should be asking you?

I always love an opportunity to talk about my time at College (maybe too much) so if there’s any other questions to answer or other info you need just reach out.

Susannah shared some photos with us from her time at Drew’s: