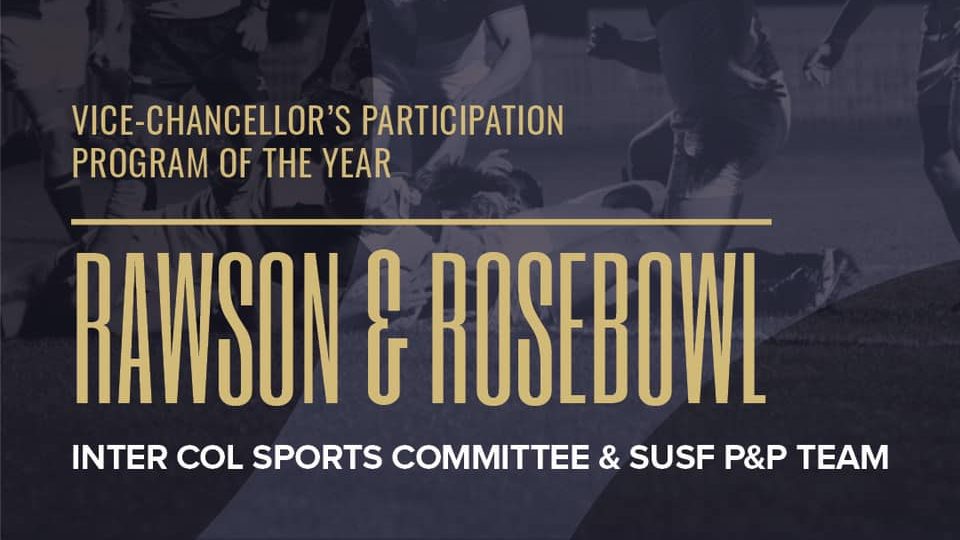 St Andrew’s College had a magnificent showing at the 2020 SUSF Awards.

The prestigious Sydney University Sportswoman of the Year for 2020 was awarded to Hannah Buckling (fr 2010). St Andrew’s alumna Hannah made her Olympic debut at Rio 2016 in the Australian Women’s Water Polo Team and is headed to Tokyo in July. Andrew’s woman Alice Arnott (fr 2016) was also nominated for this award.

Andrew’s man Rohan Browning (fr 2016) currently the fastest man in Australia, and the first Australian male to qualify for the 100M sprint since 2004, appeared on the Athletes’ Panel at the event.

Intercollegiate Sport (also known as the Rawson Cup and Rosebowl) was awarded the Vice Chancellor’s Participation Program of the Year for its significant efforts in a COVID-stricken 2020. Congratulations to the Intercol Committee, SUSF Programs & Participation department and all the participating Colleges and sportspeople.

“I’m delighted that the importance of inter-college sport to the University community has been acknowledged by the Vice-Chancellor’s participation award for 2020, because the colleges have been integral to the establishment and ongoing success of sport at the University of Sydney for more than 150 years.

Professor Geoffrey Sherington and Steve Georgakis in their magisterial history of sport at Sydney, Sydney University Sport 1852-2007: More Than a Club, make the point that at the centre of the embedding of sport as a sustainable core of the culture of the University of Sydney in the first fifty years of its history, were the three pillars of:

In addition to this acknowledgement of the colleges’ commitment to sporting opportunity for all, I’m equally delighted that Androvian Hannah Buckling’s award as Sportswoman of the Year highlights the fact that colleges also have a role to play in the development of elite athletes – commitment to success at both ends of the sporting spectrum.”

Intercollegiate Sport is one of the oldest and most prestigious sporting competitions in the country. It provides the opportunity for over 2,000 students to represent their College as they battle it out in 10 different sports across two semesters.

When COVID hit in March 2020, only the cricket competition of the Rawson Cup had been completed. By the time the restrictions were being lifted and the College students were back, it was early semester 2 and, under the request and guidance of the Intercol Sports Committee, the SUSF Programs team worked hard to re-schedule the nine remaining sports competitions to be played over the remaining weeks of semester and under the tightest of COVID restrictions.

The Intercol Sports Committee played a pivotal role in assisting the SUSF Programs team in achieving this challenging task. Significantly, for the first time in the history of the tournament, SUSF was able to provide a livestream service using college students as our light-hearted commentators. This was well-received by supporters.

It ended up being one of the most exciting years on record, with the St Andrew’s ladies putting on a dominant display to win the Rosebowl, and the Rawson Cup being decided by the outcome of the final Rugby match between St Paul’s and St Andrew’s Colleges. Happily, St Andrew’s emerged the eventual winners.