On 1-2 February, St Andrew’s College hosted Symphony for Life’s inaugural summer camp. Symphony for Life is a wonderful not-for-profit organisation that brings free string instrument tuition and music education to children who would not otherwise have that opportunity in and around the Sydney suburb of Wentworthville, just past Parramatta.

Thirty-one such children between the ages of seven and fourteen called the College home for the scorching weekend, taught by eight professional string tutors and aided by a coterie of Symphony for Life parents and staff – including the charismatic Karen Carey, one of Australia’s most influential and best-loved music pedagogues (and who was just honoured with an OAM for services to secondary education). Artist in Residence Ben Adler, Director of Education and Student Life Will Cesta and Dean of Admissions Minami Takahashi also assisted throughout the weekend.

The camp proved an invaluable developmental opportunity for the children. It was Symphony for Life’s first chance to engage students in music making for longer than two hours at a time; further, the College’s ample spaces were perfectly suited not only for ensemble and choral rehearsals and percussion workshops, but also for ‘break-out’ rooms in which tutors could afford students individualised attention.

The students reaped the rewards of their intensive tuition and improved out of sight – evinced in the weekend’s concluding concert, which saw the Reading Room packed to standing room only capacity with enthused family members and supporters. The string tutors, joined by Ben Adler, opened with Corelli’s popular ‘Christmas Concerto’; the rest of the hour was devoted to both the junior and senior string ensembles, as well as the combined choir, and even featured improvisation. A Symphony for Life board member commented that the playing standard was recognisably higher than the previous year’s.

The camp was also the first time many of the children had visited the University of Sydney – or, indeed, travelled this far east. Their disbelief and glee upon setting eyes on our sandstone castle was priceless: inevitably, St Andrew’s became Hogwarts and staff were assigned the sobriquets of Harry Potter characters. Even parents were astonished by the beauty and grandeur of our College, and many a grateful ‘tourist’ photo was taken.

It was a pleasure to witness the sounds of music and children’s laughter breathe life into the otherwise hibernating Main building. We look forward to developing our partnership with such a worthy cause.​

View photos from the event here. 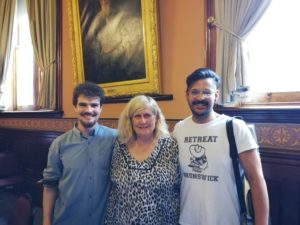