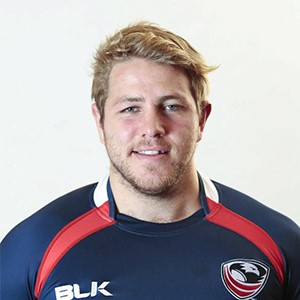 Tom Coolican (Fr 2008) is an American-Australian Rugby Union player who played professionally for the San Francisco Rush team during their 2016 campaign. Currently, he works for an American research and advisory company in Sydney called Gartner. He also coaches the under-15As rugby union team for his alma mater, St Ignatius’ College Riverview.

Tom was born in Cleveland, Ohio in the United States but was raised in Australia where he began his rugby career. Whilst at St Ignatius’, he earned his first XV honours which led him to be selected for New South Wales Schoolboys rugby union team. After high school, Tom took a gap year in the UK and was offered an opportunity by Bill Porges (St Andrew’s Principal 1999-2008) and Nick Ryan (Sydney University Football Club) to reside at St Andrew’s College. During his residence, he studied a Bachelor of Business and Bachelor of Laws at UTS. He previously knew about colleges because his mother is an alumna of Women’s, but said he didn’t entirely understand what colleges were about until O-Week:

“I think we are all a little lost when we lose the structure of high school, and university can be a very lonely place. Not for me. Heading to St Andrew’s was a decision that legitimately changed the course of my life. Not only has it elevated my trajectory as an athlete and in my profession, but most importantly I have been able to make friends for life. Both male and female. My sister followed two years after me, and she was lucky enough to meet her now husband at Drew’s too. Had I known that my now brother in law was dating my sister at the time, I might have thought twice about selecting him for the Drew’s Rugby team!”

During his three years at College, Tom played for the College’s rugby team and became the captain in his final year. Tom was also involved in the Drew’s cricket team in his second year of college. His favourite part about being at college was the “…sense of belonging and camaraderie”. He misses living with individuals who are incredibly motivated to achieve their goals, the stimulating conversations at formal dinners, the blood and sweat shared on the sporting field and late nights at the Highlander.

There is something infectious about being surrounded by people who are at the top of their field…[It] taught me so much about the importance of hard work, not accepting mediocrity and appreciating your friends.

Although Tom studied a Bachelor of Laws, and continued to study a Masters of Sports Law at St John’s University School of Law in NYC, he currently works as an Account Executive at Gartner.

“I never imagined going into technology, especially given the fact that I had invested so much time and study into my legal career. Whilst living in San Francisco, a lot of my teammates who had studied at schools such as Cal Berkley and Stanford were working in start-ups and technology related organisations. I think in Australia we are often behind the 8-ball whereby we still possess the conservative view that you can only study law, finance or medicine. When I saw incredibly intelligent individuals who had turned down business/law/medical school opportunities to pursue careers in technology, I figured that it was a case of get on the tech train, or get left behind at the analog station.”

Because of his time at college, Tom says he developed a “sense of optimism and view of limitless possibilities”, which led him to the United States to pursue his rugby union career:

“Playing against the All Blacks, facing the Haka at Soldier Field in Chicago in front of a full house with my parents, family and partner in the stands was an experience that I will never forget and it made the whole journey worthwhile. Beating Romania in Bucharest a week later only days after Russia had invaded the Ukraine was also an amazing experience. The tension at the game and in the whole region was terrifying- we had a couple of thousand U.S Marines on the sidelines that were essentially our security entourage – getting mobbed by them after we won the game was a pretty amazing experience!”

If he could give current Androvian’s any advice, he would say:

It’s very rare in life to be given an environment where you can share experiences and moments that allow you to make friends for life. Appreciate the opportunity, appreciate the friendship and make the most of the time you have within those walls – they are special! As the job market gets more and more competitive, it is the soft skills that you develop at College and the relationships that you cultivate that will serve you just as well as a degree.

Tom was recently commended for arranging an eye-opening experience for his Iggy’s under-15As team as they played against the Australian Women’s Sevens team in June this year. Tom says about the experience: “For boys who are educated in an all-boys environment, especially in these formative years, experiences like this will stay with them forever.”

He’s also made his debut as a commentator on Fox Sports, calling the NRC game between Fiji and NSW Country.