Home / Victory for St Andrew’s in the Rosebowl Hockey 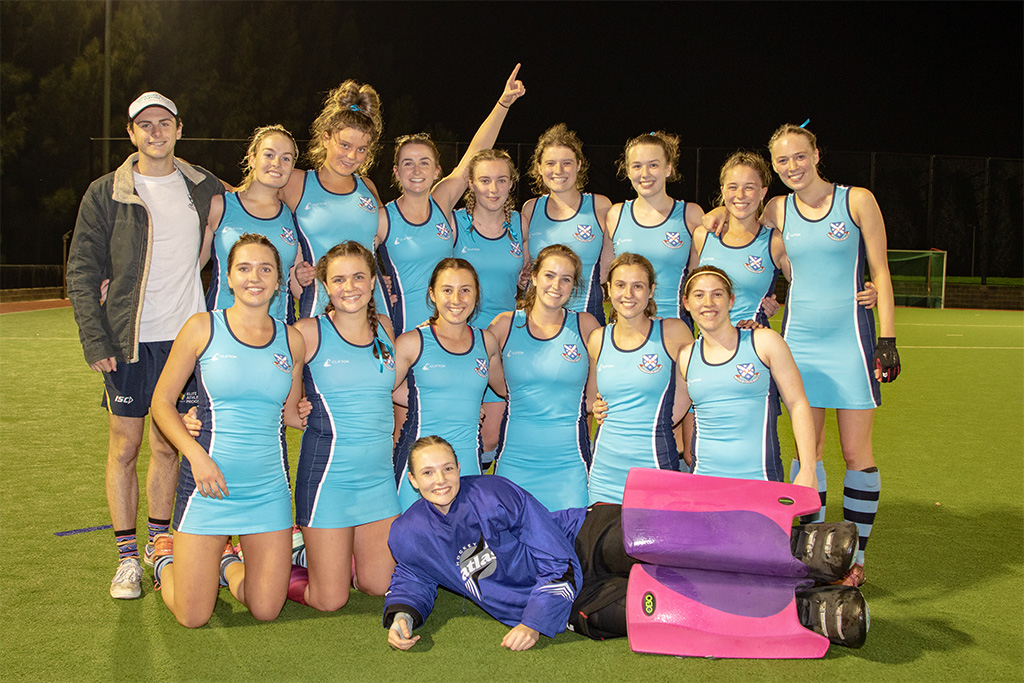 Victory for St Andrew’s in the Rosebowl Hockey

2019 will rightly take its place as a momentous year for the St Andrew’s Rosebowl hockey team. Securing the Rosebowl cup once again, the Drews women dominated the hockey season – scoring a total of 11 goals throughout the campaign with only 3 goals being scored against them.

The team welcomed some fresh blood in 2019 with six members of the victorious 2018 Rosebowl hockey team graduating from College last year. The women trained for two months, perfecting their ‘tomma-hawks’, streamlining their corners and refining their tackles. The extension of the games to 60 minutes rather than the previous 40 minutes meant particular attention was paid to fitness with a running and cardio session once a week on top of two skills sessions.

The day finally came for the first game against St John’s. The Drews women showed no hesitation; Emma Bills (Fr 2017) scored the first goal within the ten minutes of the game. John’s then fired back with a deflection to bring the score to 1-1. The tension was high towards the end of the first half until Drews secured another goal by Alex Hewish (Fr 2016), giving the girls a sense of confidence and calm going into half time. The second half was a tough battle as both teams began to tire. However, our women conserved their energy and allowed the ball to do the work, which paid off when Lizzy Hewish (Fr 2019) scored a great straight shot off a corner in the final 10 minutes. The girls were glad to to come away with a convincing win 3-1.

The second game was two days later against The Women’s College. Muscles were sore but spirits were high. The women figured out early that Women’s relied on two key players in the middle. Using this to their advantage, the Drews team were able to score the first goal after a speedy getaway from Sophie Saunders up the wing and pass across to Alex Hewish to pop the ball behind the goal line. Emma Bills secured the second goal from a rebound on a corner. Women’s scored an impressive goal from a very tight angle to make the final score 2-1. Credit must be given to Gabi Warner (Fr 2018) for strong game deflecting balls left, right and centre.

After a few days rest, game three against Wesley College was a close match and an entertaining 60 minutes. Katinka Morris (Fr 2019) was nearly sent off the court for being too enthusiastic. The goals against the Wesley women in the third game were scored by Katinka Morris, Lizzy Hewish from a stroke and Alex Hewish from a corner to secure another great win of 3-1.

A roaring crowd of students, parents and alumni surrounded the hockey field and created a great atmosphere for the final game against Sancta Sophia College. Excited and eager to play, the women received an energising ‘pep talk’ from Senior Student, Jack Mackenzie-Wood before the game. Sancta would be the hardest game yet based on results and the girls were feeling nervous but ready.

Within the first minute of the game, Katinka Morris hit one of her powerful shots into the backboard sending the Drews crowd wild. With adrenalin rushing through all the players, the focus for the next five minutes was to settle and focus on simple passes. With short corner goals a strength, the last 20 minutes of the second half were crucial, however Lizzie Hewish’s short corner goal at the final hooter led to a St Andrew’s victory with a score of 3-0. Thrilled with the result, a mass of Androvians swarmed the field to congratulate the women on yet another great Rosebowl Hockey campaign.

Warm and heartfelt thanks must go to the College’s students, alumni and staff who travelled all the way to Cintra to support the women throughout the campaign. Your enthusiastic support makes marked difference for the players and we cannot thank you enough for taking time out of your busy days to watch us play. Special mention must go to coaches Eden Bradford (Fr 2018) and Sam Wright (Fr 2019) for all your knowledge and wisdom and Mckenzie Carr (Fr 2018) for being a great secretary and getting the best uniforms yet! I am so proud to have been part a strong team of hockey players for the last three years and cannot wait to see what the future holds for St Andrew’s College Rosebowl Hockey.