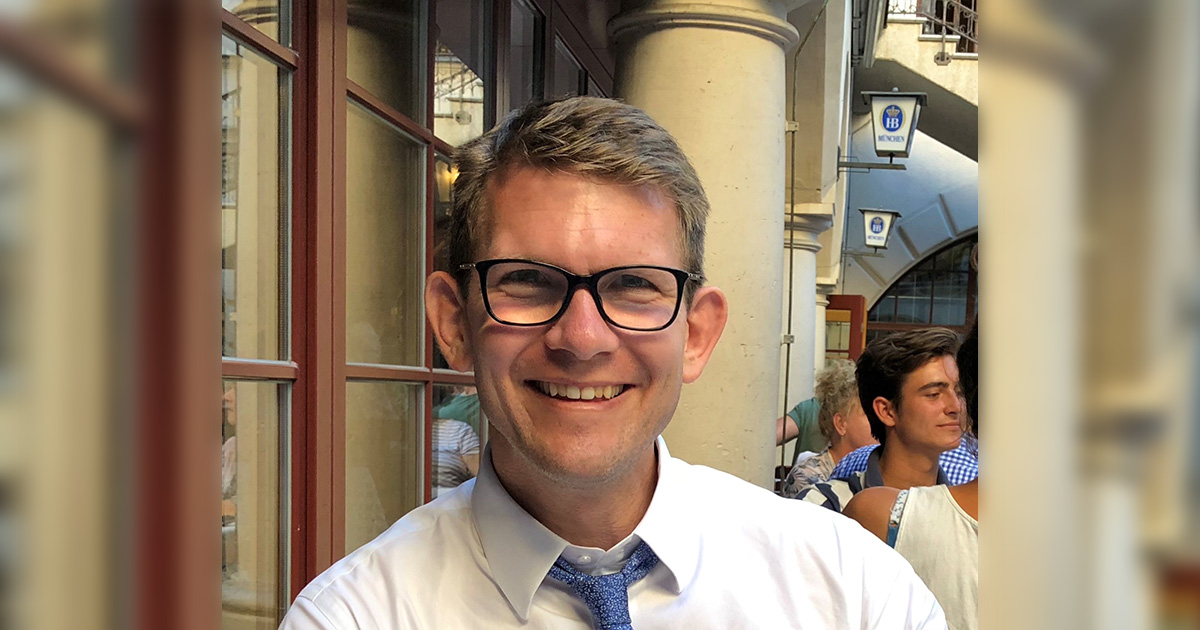 Degree: Bachelor of Arts (Honours), Politics and History from the University of Sydney, Masters of Arts, Politics by Research from UNSW and Master of Studies, International Relations from University of Cambridge

Cameron Mitchell (Fr 1998) is the Head of Geopolitical Risk at ANZ. He shares with us his journey after College, which included working in intelligence for the Department of Defence and Royal Australian Navy. During this time, he held a number of different roles and has worked abroad in countries during periods of armed conflict. Cameron has also furthered his studies, going on to complete not one but two Masters in Politics Research and International Relations. He highlights the need to keep expanding his knowledge base as he continues to progress in his career.

I always wanted to go to a university college as I feel it is an essential part of university life. Drew’s appealed in particular because of its strong Scottish traditions – I have Scottish heritage through my Dad, who is from Scone in Scotland. There was also a strong link between the College and The King’s School, where I was boarding at the time.

The social aspects were hard to avoid! I really loved that side of things and am still close to my Thyne corridor buddies that I met on my first day. Other than that, I was involved in DramSoc, Rawson Rugby and Rawson Rowing.

What led you to initially pursue a career in the Defence Force?

I’d always been passionate about global security issues and had chosen to explore China’s People’s Liberation Army modernisation in my Honours year at Sydney, so a career in that sector seemed like a natural next step.

You worked as an Intelligence Officer for the Royal Australian Navy in addition to a number of different roles, either linked to or with the Department of Defence of Australia. What did you enjoy most about these roles and how did you manage working with such highly classified information that was critical to missions and operations?

I initially joined the Defence Department as a civilian intelligence analyst before joining the Navy Reserve as an Intelligence Officer. The Navy offered an element of tactical insight to complement the strategic insight needed for my civilian day job, which I hoped would offer more overall depth to my analysis in both roles.

Working in the Defence Intelligence Organisation in the 2000s was really rewarding, as it provided the rare opportunity to provide intelligence support to Australians serving overseas. Following a lull after the first Gulf War in 1990-1991, Australian overseas operations gradually ramped up in East Timor, then Afghanistan and then Iraq among others, reaching a peak in the mid to late 2000s. Serving in support of those operations was always something I wanted to do – irrespective of the politics, there were Australians in harm’s way.

I also loved the strategic aspects of the Canberra-based work. Supporting the Defence White paper planning processes and working with our allies overseas were highlights. Working with classified information was part and parcel of the role – you received great handling training in the first place, and then everything became routine.

You spent some time working abroad in countries such as Iraq and Afghanistan during periods of armed conflict. Could you share with us what this was like and what some of your experiences were over there during this time?

I deployed to Baghdad in 2007 as a civilian and then Kandahar in 2011 with the Navy. Both six-month deployments were fascinating for different reasons. In Iraq, I rarely left ‘Camp Slayer’, a base that only the US military could have named. We lived in former Iraqi army officer accommodation and worked closely with the US military in the converted ‘Perfume Palace’, originally built for Saddam Hussein’s sons, Uday and Kusay.

Most of the work was of a high-level strategic nature, whereas Kandahar was far more tactical, and I was able to leave the base far more frequently. In Kandahar, I frequently travelled to fairly remote parts of Oruzgan and Daykundi provinces where I was able to engage with local Afghans. That was a highlight. Overall, the hours were long and monotonous, interspersed with occasional surprises. Like all challenging life experiences, your memory tends to cling on to the good stuff.

After your time at the Department of Defence, you moved to Hong Kong and started working in Geopolitical Risk for HSBC. How did you find this transition – not only with moving countries, but also moving to the banking industry?

Growing up overseas imbued me with a strong desire to find work that would bring international experiences for my family, so when the opportunity came up to work for HSBC in Hong Kong, we jumped at it. At that stage, I’d also only ever worked as a public servant, and the challenge of working in the private sector had always been something I’d wanted to experience. Moving countries was relatively easy – Hong Kong has a vibrant expat vibe, and with so many people working there without their extended families, you tended to make strong friendships very quickly.

On the work front, I found the switch to banking quite daunting. It was a steep learning curve, but the impact geopolitical risk was having on the sector gave me some breathing space to develop my banking knowledge. Overall, the public sector to private sector transition was much easier than I had anticipated – the Australian Department of Defence and HSBC are both big bureaucracies!

Could you tell us a bit more about your current role as Head of Geopolitical Risk at ANZ? What does the role entail?

Geopolitical risk was not traditionally much of a concern for the private sector, but it has risen in prominence in recent years, thanks largely to rising levels of populism and protectionism at home and abroad and the return of great power competition. Shareholders in multinational corporations with significant international exposure now expect geopolitical risks to be identified, categorised and assessed.

At ANZ, the role aims to reduce uncertainty and enhance the understanding of complex geopolitical issues of direct relevance to ANZ and its customers. This is achieved by developing or sourcing objective, relevant and concise oral and written assessment of both geopolitical risks and opportunities, to enable the senior management to make better-informed decisions.

You have gone on to further your studies completing a Masters of Arts in Politics by Research and are currently a Masters Candidate with the University of Cambridge studying International Relations. How has this further study been helpful in your career?

As my career has progressed, I’ve had to expand my knowledge-base to do my job properly. Additional study has helped me achieve this. In particular, my last role at HSBC was London-based and saw me writing or editing geopolitical risk assessments on topics that I wasn’t always familiar with. Completing the IR Masters at Cambridge let me continue working, while learning about new topics such as European politics, Latin American politics and the impact of technology on geopolitics.

What do you like to do outside of work?
Sophie and I have three kids under 12 now, so that answer is an easy one! Plenty of time with the kids these days, particularly given the COVID situation, which is a nice change from the fairly hectic overseas work and study schedule over the past few years. I’ve loved being back in Canberra catching up with old friends – and a few Drew’s alumni. The family has also taken up surfing, so we’re looking forward to Spring and a return to the South Coast for some much-needed practice. Helping our Aussie winemakers by expanding the wine cellar has been an added bonus.

Gosh, I’ll try and keep this short. I’m a massive fan of podcasts about history and geopolitics: Tim Hartford’s Cautionary Tales is just magic, as is Dan Snow’s History Hit. For geopolitics, I’d recommend the Council on Foreign Relations’ The World Next Week, plus Australia in the World. For China nerds, Pekingology is a must, particularly episodes run by Jude Blanchette.

I’m reading a couple of books at the moment: Rubicon, which is an excellent potted history of the Roman Republic by Tom Holland, and Where Great Powers Meet by David Shambaugh, which is a study on US-China competition in Southeast Asia. I have a bad habit of starting books, reading many at the same time, and finishing few.

Do you have any words of advice for young Androvians looking to pursue a career like yours?

Hmm, not sure I should be dispensing advice when it comes to career paths. I’ve always had a habit of doing what I love, from my BA in History and Government (which was the subject of much mirth among my Drew’s colleagues), to working in the security space in government, to then applying that in the private sector and travelling. I’ve always considered the advice of others, but not always followed it if it ran counter to my passion. Of course, timing is important too. Often the opportunities come as a result of timing as much as the depth of your CV, so be patient. I guess that’s advice of a sort: do what you love doing, if that’s geopolitics, then go for it, be patient, and the rest should fall into place.