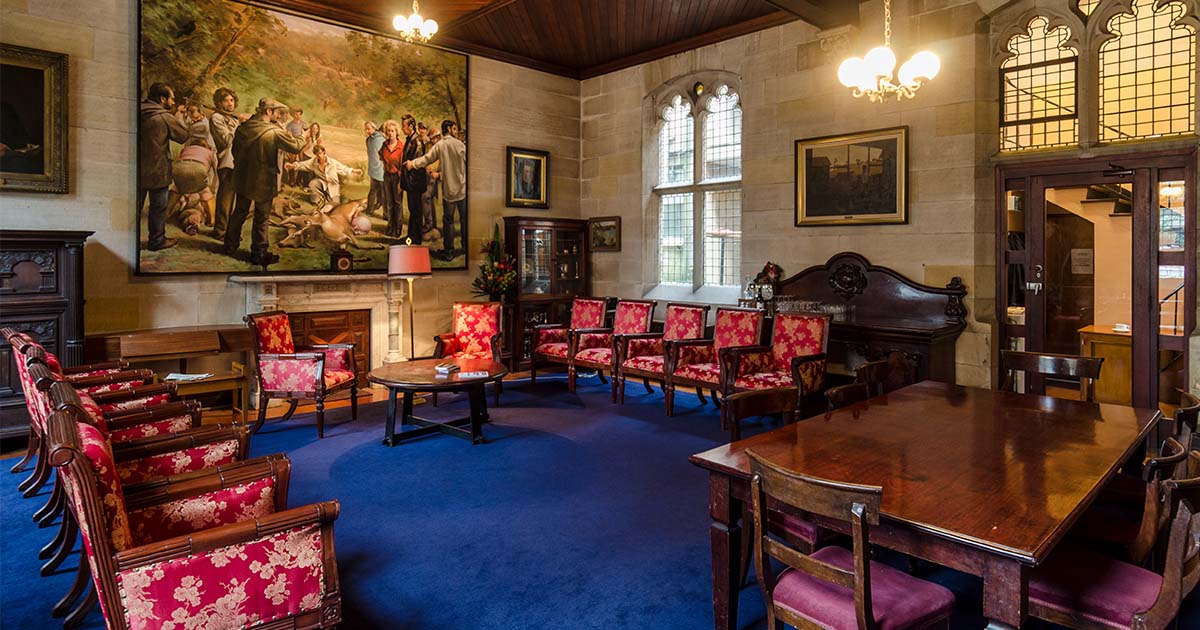 The achievements and contributions mentioned below represent only a small fraction of the contribution to the intellectual and cultural life of St Andrew’s College made by our newest Honorary Fellows. With great pleasure, we salute you and thank you for your service.

Eleanor Gammell
Eleanor entered St Andrew’s as a fresher in 2005, following her brother James and father Ian. She was always going to pursue UNSW’s Art History and Theory degree, but was so pleased that the College had made the decision to become co-res so that she could come to Andrew’s. In her three years at College, Eleanor –

Eleanor served on the College Council from 2015 to 2021 and her deep connections in the world of art and seamlessly commissioning of artists have generated significant benefit to St Andrew’s. El has a deep affection for the College, and a special interest in student life and its range of programs that add great value to the student experience. We’ve been greatly favoured by El’s generous contributions to the Council’s Education & Student Life Committee and to the Council.

Dr Sarah Penicka-Smith
Dr Penicka-Smith joined the St Andrew’s community as the Director of Music in 2011. Since this time she has directed the chamber choir in College and supported the numerous student led music groups including Chemble and Jazz band. She has been an impressive leader in College, supporting both excellence and community involvement. She and her wife Mel have been active members of the SCR throughout her time in College.

In 2019 she toured Vietnam and Cambodia in a groundbreaking project with Pacific Pride Choir, co-directed by Melanie Penicka-Smith, which inspired the foundation of Hanoi’s Diversity Choir and a gay singing ensemble in Cambodia. She also directed the inaugural seasons of Macquarie Chamber Orchestra and River City Voices and continued her direction of the Lifehouse Volunteer Orchestra at oncology hospital the Chris O’Brien Lifehouse.

Sarah has served on the Musica Viva Artistic Review Committee, and as a juror for the Vocal/Choral section of the APRA/AMCOS Art Music Awards. She is an alumna of the prestigious 2018 Hart Institute for Women Conductors at The Dallas Opera, where she made her international debut.

Alexander Conway Wright
Alex joined St Andrew’s College as a Fresher in 2014, and has made an extraordinary contribution to College life, both in his capacity as a student and as a member of staff.

While studying, Alex has made a momentous contribution to the Education & Student Life Department in St Andrew’s. His first role, taken in just his third year of College, was as a Junior Academic Area Tutor. Alex taught history, geography and archaeology. So obvious was his talent – and valuable his contribution – that he was soon appointed to the role of Dean of Studies. He was then promoted to the role of Teaching Fellow and Head of Arts in 2021. Alex has also worked as an Assistant Archivist, and the Acting Archivist between 2020 – 2021.

As a student, he had a profound impact on the College. Not only did he represent the College in the Palladian Cup – he was also a major contributor to important conversations about College culture and the identity of the St Andrew’s community. He also made time to become deeply involved in Students’ Club events and activities and enjoyed a great friendship with his mentor, Professor Ian Jack. Alex has been a constant and valued presence in the Senior Common Room for many years, acting as a custodian of many of the rich traditions that have made the SCR such a vibrant community.