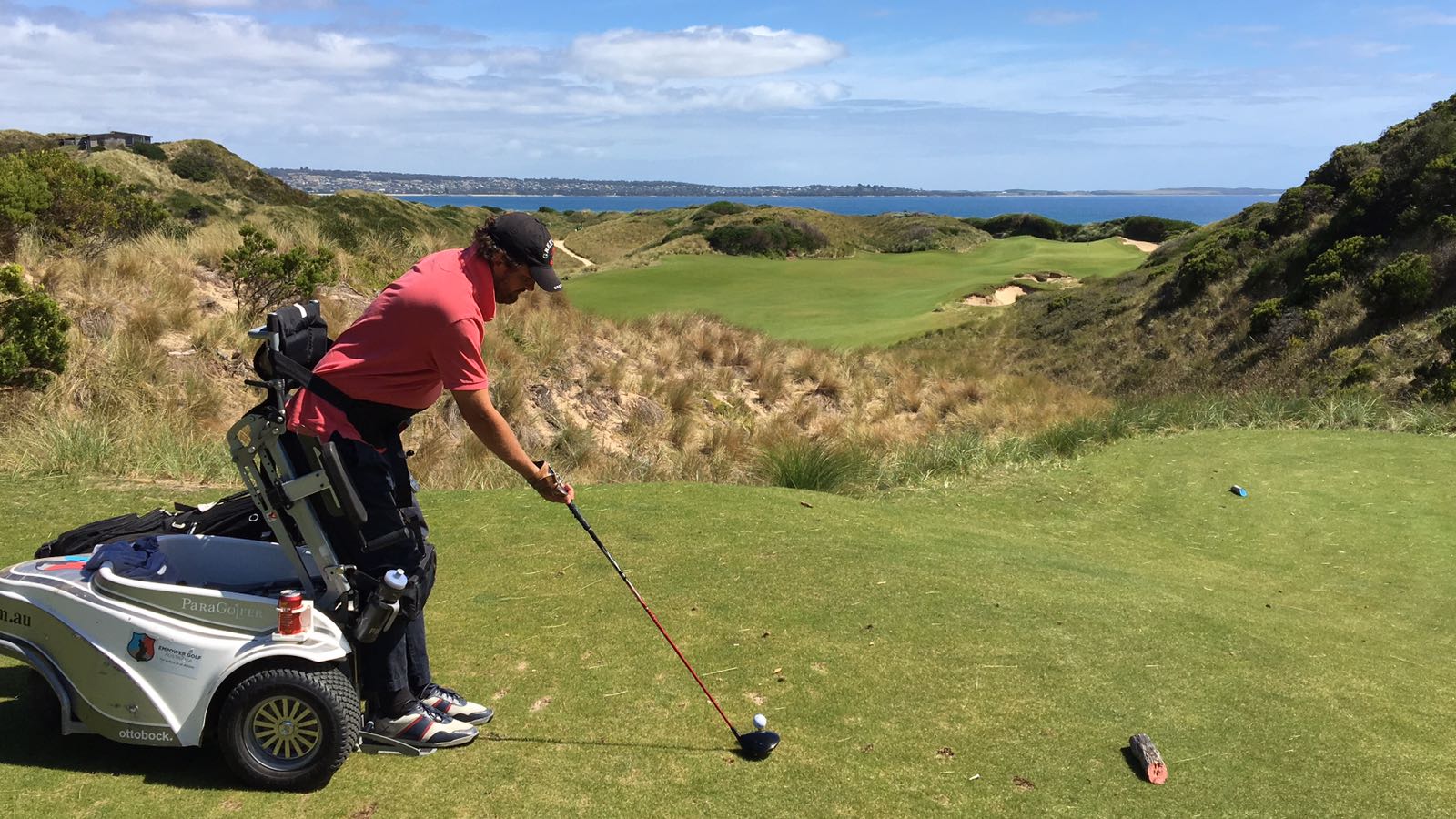 “Try to establish what ‘success’ looks like for you and build your life around making that happen. Pursue your passions and you will always be a success whether professionally or personally.”

James Gribble is the founder of Empower Golf, a not-for-profit dedicated to enabling access to golf for Australians of all disabilities. The goal of the company is to establish Empower Golf Hubs at golf courses nation-wide, provide equipment and organise development days, coaching and tournaments with the ultimate goal of Paralympic inclusion.

James grew up between Sydney and Kuala Lumpur, Malaysia where his parents resided. He boarded at Shore School and wanted to continue his studies in Australia, so chose to become a member of St Andrew’s College at the University of Sydney. Whilst at College, he was involved in many sporting teams including those for swimming, rugby, basketball, soccer and athletics. James’ favourite part about being at St Andrew’s was “The mateship, camaraderie, representing College through various sports and all the Scottish links and traditions, in particular the haggis and bagpipes.”

After graduating with a Bachelor of Economics in 2000, James worked in finance for almost a decade in London. He continued to pursue a highly active lifestyle and travelled to Africa in 2008 in an attempt to hook the elusive tiger fish of Southern Africa. The night before he was due to head out onto the mighty Zambezi river, James was on a tiny island in thatched fishing hut and felt faint from dehydration. He fell backwards off a stool and onto hard sand; the impact broke his neck and left him a quadriplegic. Throughout his recovery and rehabilitation, James would visualise himself playing golf and other passions. He was determined to play once more despite doctors telling him he would never walk again. After seven months in the hospital and another four years of intense rehabilitation, James took his first steps. His recovery journey taught James patience and resilience and inspired him to found Empower Golf, a not-for-profit dedicated to enabling access to golf for Australians of all disabilities. Reflecting on his journey, James says;

“When you have a catastrophic life-change, really your mind goes to your biggest passions. Following my accident, I was obsessed with recovering as fully as possible through physical, psychological and emotional rehabilitation. I was very lucky to benefit from what I call ‘exercising to recovery’. During this personal journey I was working towards returning to my many passions which were taken away when I became a quadriplegic. One of those was golf. Seeing just how beneficial it was for me personally I wanted to ensure that all Australians living with disabilities had the same opportunity to enhance their overall well-being. Hence Empower Golf was established.”

James believes his biggest accomplishment in life so far has been:

Building a new life where I am enriching people’s lives through my profession whilst balancing my personal life, health, friendships and passions.

Before his accident, James was a top golfer and had even toyed with the idea of going professional. Today, he is one of the only quadriplegic golfers in the world and uses a specially designed wheelchair which elevates him into a standing position.

Empower Golf has been operating for five years and employs five people with a disability. Volunteers help the organisation reach 4,000 Australians a year through golf clinics, private lessons and supplying golf equipment.

Golf is the largest ball sport in Australia by far and we have more golf courses per capita than pretty much anywhere else in the world…Given one in five people in Australia has a disability you’d expect so many more people would be playing sport with disabilities, but that’s just not the case, unfortunately.

A major goal of Empower Golf is to “Establish forty fully inclusive golf facilities nationally (we are currently at fourteen across five states) which would mean that 95% of Australians with disabilities would be within half an hour of accessing and enjoying golf. We are also looking into other sports and especially travel.”

When James is not helping make golf courses nation-wide more disability inclusive, he also works closely with the Royal Rehabilitation Hospital in Sydney, the same hospital where he undertook seven months of rehabilitation, particularly in the ‘Return2Sport’ initiative. The ‘Return2Sport’ initiative helps those with disabilities to discover the perfect recreation activity for their interests and abilities. James also is an ambassador for Sargood on Collaroy, a spinal injury resort in Sydney’s northern beaches. Empower Golf and the Sargood Foundation have also partnered together to bring a Paragolfer to the Long Reef Golf Club in Collaroy. A Paragolfer is a German designed all-terrain wheelchair that raises the user into a standing position, to allow a more conventional golf swing (the specially designed wheelchair used by James that was mentioned previously). Furthermore, he is lobbying for golf to become a Paralympic sport, is an inspirational speaker and wants to grow Empower Golf into Empower Sport, Empower Travel and Empower Care.

In 2017, with a group of eight friends, James went back to Africa determined to continue his trip almost a decade prior and catch the prized tiger fish. His friend and filmmaker, Nicole Alexander, is making a feature-length documentary ‘Tiger Fish’, about James’ journey to get his life back after the accident, with plans for its release later in 2019. To find out more about James’ journey and his film, follow: https://www.tigerfishfilm.com/.