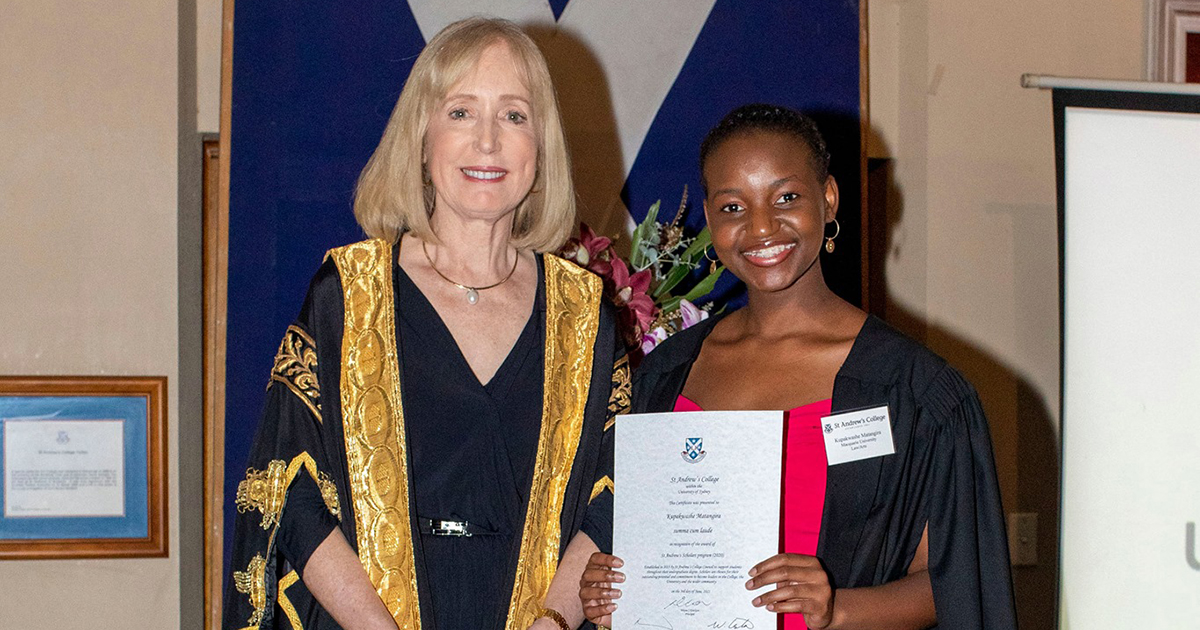 “Young people are nuanced, inquisitive and diverse, we care about the world around us and should be afforded our right to participate in decision-making that affects us.” Kupakwashe Matangira

Meet Kupakwashe Matangira (Fr 2020), a St Andrew’s scholar and student of politics, philosophy and economics at UNSW. Known as Kupa to her friends, she is a passionate advocate for children and young people and is working with the Office of the Advocate for Children and Young People (ACYP), Save the Children and MCW Global alongside her studies.

Tell us about your experiences with the ACYP

Working with the ACYP and representing NSW’s 2.4 million young people was an absolute honour. The NSW Youth Advisory Council (YAC) plays an important role in advising the NSW Government on issues that are relevant to young people across the state.

For me, being a part of the 2020-21 YAC was particularly important because young people across NSW had faced cumulative disasters – the drought, bushfires and floods just to name a few, and all of this was under the backdrop of the Covid-19 pandemic. In the midst of all this, I believed it was imperative for young people’s voices to be heard and their participation in decision-making valued.

My key achievements on the YAC include working with the NSW Education Standards Authority to improve the current High School Syllabus and working with the Ministry of Education to strengthen the understanding of consent and harm prevention within schools. This was especially important given the sexual assault reports coming out of high schools and the changes made to sexual assault laws and the definition of consent. See more here: statement-of-intent-our-shared-commitment

Why were you invited to dinner with the Governor of NSW?

Before our last session at the YAC, we were invited to dinner with the Governor of NSW to celebrate our advocacy for children and young people across NSW.

How did you get involved with Save the Children (SCA)?

I became a Youth Ambassador for SCA in 2018 and used this national platform to fight violence against women and their children. I also co-authored the 2018 SCA ‘Youth Manifesto for Change’, a document which listed the policy aspirations of young people in areas spanning across climate change, closing the gap between Indigenous and non-Indigenous Australians, getting kids off Nauru and youth mental health.

In the role I helped lobby senators and parliamentarians to extend Australia’s ‘National Plan to Reduce Violence Against Women and Their Children’ beyond 2022 and include a greater focus on the impact of violence on a child’s mental health to ensure that no Australian child dies from, or is adversely affected by family violence. The outcome of that mammoth advocacy effort was an extra $323 million added to ‘The Plan’ and a $10 million increase in mental health funding within schools amongst others.

Now I work as a youth worker and policy consultant for Save the Children NSW. In this role, I help facilitate workshops across NSW focussed on empowering children and young people to believe in the power of their voice, know what rights they are entitled to and to be active citizens, especially following emergencies, allowing them to impact their community’s decision-making process. I am also beginning to work with children and young people who have been in contact with the justice system.

Tell us about your project as a MCW Global Young Leader

The MCW Global Young Leaders program is basically like an incubator for social justice ventures headed by young people across the world. 20,000 people expressed interest for only 50 spots and over 30 countries were represented.

My project focusses on closing the gap between Indigenous and non-Indigenous young people in health and education within the Hunter and Mid-coast regions. It builds upon my existing social enterprise which creates notebooks and the proceeds go towards educating orphaned girls in Zimbabwe. (So far we’ve been able to pay for five girls to go to school.)

Initially the young leaders were meant to meet at a leadership retreat held across New York and Vermont last year but we moved online because of COVID. This meant I was attending zoom sessions at 2am, but it was truly an honour to be a part of the program. I am working on making my proposal a reality, and I graduate from the program at the end of this month!

MCW Global is a world-wide non-profit organisation based in New York, whose mission is to empower current leaders and ready leaders of tomorrow.

What is your biggest goal for the future?

To continue to fight for the voices of children and young people around the world, especially those from minority backgrounds, to not only be heard, but meaningfully listened to in the decision making process. Young people are nuanced, inquisitive and diverse, we care about the world around us and should be afforded our right to participate in decision-making that affects us.

What made you choose St Andrew’s?

I chose St Andrew’s for a few reasons: its demonstrated excellence, academic rigour and strong social scene being a few. Androvians have gone on to do amazing things for their respective communities and even the world, I wanted to be a part of such an incredible community.

How do you feel St Andrew’s supports you to achieve your goals?

I am a St Andrew’s Scholar, and the scholarship is what has allowed me to be here. Going to Drew’s is so much more than accommodation for me, it is being part of a community of ambitious and like-minded young people who are itching to make a difference.

Through coming here, I am able to study PPE, something that was not offered at my local university, and partake in opportunities such as the Certificate of Cross Disciplinary Problem Solving which has honed and expanded my skill-set, all of which will support me in achieving my goals.